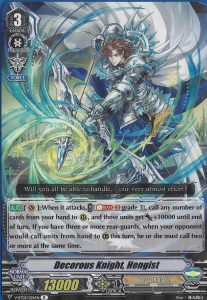 Will you all be able to handle… our very utmost effort?

[AUTO](VC):When it attacks, COST [Soul Blast (2) grade 3], call any number of cards from your hand to (RC), and those units get [Power]+10000 until end of turn. If you have three or more rear-guards, when your opponent would call cards from his or her hand to (GC) during this turn, he or she must call two or more at the same time.

Decorous Knight, Hengist’s skill superior calls any number of cards from your hand when he attacks your opponent. Also, your new rear-guards gain 10,000 power from this ability, and your opponent must guard with two or more cards at the same time. This card is the only Royal Paladin in the standard format with the ability to create multiple attacks. It allows you to be very aggressive to win the game. You have five attacks, and you need to be aggressive to make them count.

Furthermore, many units have good synergy with his ability. Blaster Blade is one of the best cards play with Decorous Knight, Hengist. Blaster Blade’s ability activates when he joins the field. Then, he retires a potential interceptor to weaken your opponent’s strategy. They make a great duo for a finisher.

Unfortunately, Decorous Knight, Hengist is a very slow card for a finisher. You must have two grade 3 cards in your soul to pay his ability’s cost, and the high cost impacts your ability to play him. This means he will most likely be your third grade 3 vanguard unless you get lucky and soul charge a grade 3 card. Decorous Knight, Hengist is basically a dead card for most of the game. His only purpose is to be your finisher, and he does not have any other ability to benefit you.

Overall, Decorous Knight, Hengist is a strong finisher for a budget deck. I am currently playing him in one of my budget decks for Royal Paladin. I recommend playing two copies in a deck because you want to avoid riding him in the early game. He is an aggressive card when he is your vanguard. There is potential to create fun and exciting finishers with him.