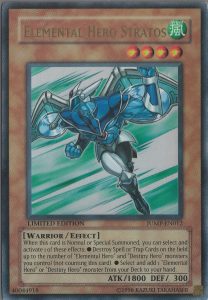 When this card is Normal or Special Summoned: You can activate 1 of these effects.
● You can destroy Spell/Trap Cards on the field, up to the number of “HERO” monsters you control, except this card.
● Add 1 “HERO” monster from your Deck to your hand.

I am not impressed with the Manga’s version of Elemental HERO Stratos. His effect in the book is very mediocre. His effect halves his ATK and he attacks your opponent directly. That is very lackluster for one of the game’s most popular Elemental Heroes. Thankfully the real game gives the best Stratos to us.

Stratos to The Rescue!

Elemental HERO Stratos has two powerful effects that activate when he is normal summoned or special summoned. However, you may only use one of his effects. Carefully consider all of your options before you make your decision. Both effects give major advantages in the right situation. You can swing the game in your favor.

The second effect adds one “HERO” from your deck to your hand. This ability adds consistency to your deck, and you will always have an effective monster in your hand.  You can set up your Fusions with this effect. You have a new HERO in your hand. Then, play Polymerization to fuse your heroes together into a powerful warrior! Elemental HERO Stratos

Overall, Elemental HERO Stratos is one of my favorite Elemental Heroes. He will make a major impact in the meta. I strongly recommend playing three copies in every deck. His effects are amazing and can give you the advantage over the opposition. You can either destroy your opponent’s back row or add a HERO to your hand.