Courage is the sword of light. Shine forth, Blaster Blade!

[CONT](VC):If you have four or more rear-guards, this unit gets [Critical]+1.
[AUTO](VC/RC):When placed, COST [Counter Blast (1) & Soul Blast (1)], choose one of your opponent’s rear-guards in the front row, and retire it.

Blaster Blade has been revamped with new arts and skills. I prefer his second art from the trial deck. It is a completely new picture of Blaster Blade. Blaster Blade’s power has increased from 9,000 power to 10,000 power. He also has two skills instead of one skill.

Blaster Blade’s first skill gives him an extra critical damage if you have four or more rear-guards. You must dedicate your hand to the board. The extra damage can put your opponent in a bad position. You have the potential to deal three damage if you check a critical trigger and your opponent does not block the attack.

Play these cards with Blaster Blade! 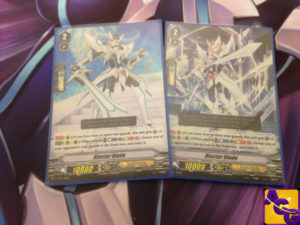 However, you will need to extend your hand to use this ability. Dealing extra damage may reward you or hurt you. The extra damage could put your opponent on the edge of defeat. However, they can use this damage to pay for more skills. Opponents could wipe out your formation, and it may not be easy to regain your resources. Be cautious when using this ability.

Overall, the new version of Blaster Blade is a step up from the original card and has great chemistry with Alfred Early. I am playing a full set in my standard deck. The first skill gives players the option to rush opponents. His second skill is the better skill, and you should try to use every game. It will be useful against opponents’ rear-guards.