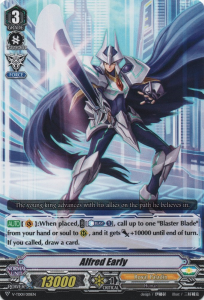 The young king advances with his allies on the path he believes in.

Alfred Early is the perfect name for Alfred as a young king. Alfred is the king of the United Sanctuary. He and Blaster Blade are best friends, and he is one of the few people close to the legendary hero. This is just the beginning for Alfred’s young journey as a king. He will grow to become a more powerful king and provide strong leadership to the Royal Paladins.

Combo: Alfred and his allies!

In addition to supporting Blaster Blade, Alfred Early is a resourceful vanguard with Exculpate the Blaster. A deck with grade 4 cards may have problems with consistency. Bushiroad created Sage of Salvation, Benon to balance the deck. Benon searches for Alfred Early, and his skill is very useful when you do not have a grade 3 in your hand. You avoid being locked on grade 2, and continue playing Cardfight!! Vanguard normally.

Play these cards with Alfred Early!

Overall, Alfred Early is a decent vanguard from a trial deck. I am playing a full set in my Royal Paladin deck, and have won many games with him as my vanguard. Alfred Early will also lead your troops to victory. He has synergy with some of the best Royal Paladin rear-guards such as Blaster Blade. He is also a good vanguard to play with Exculpate the Blaster to avoid being grade locked.