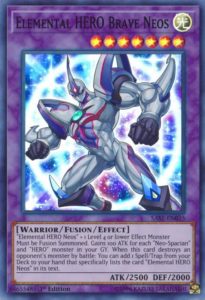 “Elemental HERO Neos” + 1 Level 4 or lower Effect Monster
Must be Fusion Summoned. Gains 100 ATK for each “Neo-Spacian” and “HERO” monster in your GY. When this card destroys an opponent’s monster by battle: You can add 1 Spell/Trap from your Deck to your hand that specifically lists the card “Elemental HERO Neos” in its text.

Therefore, you need to build a deck of Heroes, Neo-Spacians, or both archetypes. The effect quickly increases the ATK of  Elemental HERO Brave Neos. You will have a powerful monster on the field.