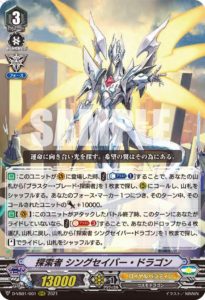 [AUTO]:When this unit is placed on (VC), COST [Counter Blast (1)], search your deck for up to one “Blaster Blade Seeker”, call it to (RC), and shuffle your deck. Until end of turn, that called unit gets [Power]+10000 for each of your force marker.
[AUTO](VC):At the end of the battle this unit attacked, if you did not ride this turn, COST [Soul Blast (3)], choose four cards from your drop, return them to your deck, search your deck for up to one “Seeker, Thing Saver Dragon”, ride it as [Stand], and shuffle your deck.

Seeker, Thing Saver Dragon (V Series) and Blaster Blade Seeker (V Series) are first support for Seekers since the format of Legion. Bushiroad did not touch this archetype from Royal Paladin for many years. Players can now rejoice with Seekers gaining new support for the V-Standard Format and Premium Format!

This ability requires two turns to prepare it because you can only activate it if you did not ride a vanguard this turn. Therefore, Seeker, Thing Saver Dragon needs to be your vanguard for two turns. Your patience will be rewarded with multiple attacks from the vanguard and additional Force Marker.

Furthermore, this ability resembles the original card’s Legion skills. You return four cards to the deck and superior ride Seeker, Thing Saver Dragon from the deck. You have two attacks from your vanguards in a single turn!

Seeker, Thing Saver Dragon (V Series) has amazing synergy with Holy Dragon, Crystaluster Dragon. Holy Dragon, Crystaluster Dragon gains the abilities of the heart. These cards create an amazing combo of awesome offense. You may use Seeker, Thing Saver Dragon’s abilities to superior himself from deck. Thus, you have two attacks from your vanguards in the same turn.