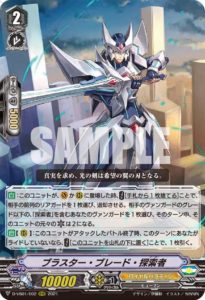 [AUTO]:When this unit is placed on (VC) or (RC), COST [discard a card from your hand], choose one of your opponent’s front row rear-guards, and retire it. Choose one of your vanguards with “Seeker” in its card name and grade equal to or less than your opponent’s vanguard, and the original [Critical] of that unit becomes 2 until end of turn.
[AUTO](RC):At the end of the battle this unit attacked, if you did not ride this turn, COST [put this unit on the bottom of your deck], and draw a card.

Blaster Blade Seeker is a grade 2 unit with 10,000 power and two abilities. The full potential of this card requires a deck for Seekers. His second ability requires a Seeker for your vanguard.

Blaster Blade Seeker’s first ability is a combination of Blaster Blade’s abilities from the V series. It is broken into two parts. The first part is a generic skill. You may use it in any deck with Royal Paladins.

Furthermore, I recommend retiring an opponent’s rear-guard with a strong ability or an interceptor. The opponent loses a key rear-guard from his or her field. Some clans such as Aqua Force and Nova Grappler rely on their rear-guards. An opponent with those clans will struggle to recover his or her resources.

In addition, Blaster Blade Seeker gains 10,000 power for each of your Force Markers from the ability of Seeker, Thing Saver Dragon. He has a huge burst of offense, and opponents will struggle to block his attack. Blaster Blade Seeker becomes a very strong rear-guard with at least 30,000 power. He swings the momentum of the game in your favor.

Play these cards with Blaster Blade Seeker in the V-Standard Format!

Play these cards with Blaster Blade Seeker in the Premium Format!

Overall, Blaster Blade Seeker is a great rear-guard for Seekers. He provides a small amount of control and good offense. You retire an opponent’s rear-guard to remove his or her advantage. You can inflict massive damage with his second ability. Decks with Seekers should play four copies of Blaster Blade Seeker.