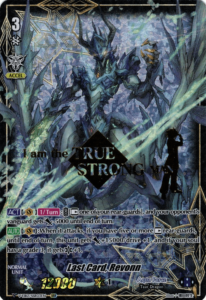 A trump card that surpasses this does not exist in this world!

Last Card, Revonn overcomes the clan’s weakness with his first ability. Last Card, Revonn decreases an opponent’s vanguard power by 5,000. Your units put a lot of pressure on the opponent. The opponent must guard with more cards, and a defensive trigger does not automatically stop the wave of attacks from Aqua Force.

Furthermore, the additional drive check is a nice benefit for Aqua Force. The clan struggles to gain advantage and drawing cards. The triple drive adds one more card to your hand. You will have a stronger defense during the opponent’s next turn.

Play these cards with Last Card, Revonn in the standard format!

In good news, you can substitute Last Card, Revonn’s first ability with Torrent of Determination, Valeos Revive! Torrent of Determination, Valeos Revive restricts the opposing vanguard’s power to 11,000 for the remainder of the turn. All of your units have the potential to deal damage to an opponent. Defensive triggers will not increase the opposing vanguard’s power!

Play these cards with Last Card, Revonn in the premium format!

Overall, Last Card, Revonn is a powerful grade 3 card for Aqua Force. I expect this unit to remain as viable card for many years in the standard format. His two strong abilities that have synergy with many cards. Last Card, Revonn overcomes Aqua Force’s weakness to defensive triggers. He also gains 15,000 power and an additional drive check.