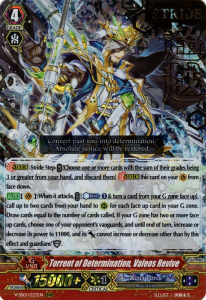 Convert past sins into determination. Absolute justice will be restored.

[Stride]-Stride Step-COST [Choose one or more cards with the sum of their grades being 3 or greater from your hand, and discard them], Stride this card on your (VC) from face down.
[AUTO](VC):When it attacks, COST [Counter Blast (1) & turn a card from your G zone face up], call up to two cards from your hand to (RC) for each face up card in your G zone. Draw the same number of cards as units called. If your G zone has two or more face up cards, choose one of your opponent’s vanguards, and until end of turn, increase or decrease its [Power] to 11000, and its [Power] cannot increase or decrease other than by this effect and a guardians’ [Shield].

Valeos is the founder of the Aqua Force and one of the six apostles of Lord Gyze. His determination to win the war for Gyze is his only motivation in life. Valeos has awaken a new power within him to become Torrent of Determination, Valeos Revive! His new skills are perfect abilities for every Aqua Force deck. He leads your Aqua Force rear-guards into battle and is determined to achieve victory.

Torrent of Determination, Valeos Revive’s skill superior calls two cards from your hand for each face up card in the G zone. This skill is great for enabling a strong wave of attacks at your opponent. It has a lot of potential if your G zone has two or more face up cards. Your first group of rear-guards will attack your opponent. Then, Valeos and your next group of rear-guards push the final wave to grab victory.

Play these cards with Torrent of Determination, Valeos Revive!

Furthermore, this skill has the potential to generate ten attacks during your turn. Your opponent will be overwhelm by your wave of units on offense. In addition, you must have the key cards to set up multiple attacks from units. Rear-guards with the ability to re-stand make this skill very powerful in the late game. Furthermore, it is extremely difficult for any opponent to successfully guard against ten attacks.

Waves of determination is a strong combo to finish games. Your units will attack 11 times during combat. This combo requires three face up cards in the G zone.

Furthermore, this skill also increases or decreases the power of your opponent’s vanguard to 11,000, and the power cannot be increased by other effects. This is a great ability to weaken your opponent’s defenses. He or she cannot rely on triggers to boost his or her defense. Your wave of attacks will pressure your opponent throughout the turn. The constant pressure in addition to triggers can win games.

Overall, Torrent of Determination, Valeos Revive reveals the greatest power from the Aqua Force. The skill is a great representation of Valeos’s power from the lore and anime. He leads the Aqua Force with determination to win in Gyze’s honor. I recommend playing at least two copies per deck. His is a stronger finisher for Aqua Force. In addition, His ability to weaken your opponent’s vanguard overcomes Aqua Force’s greatest weakness in damage triggers.