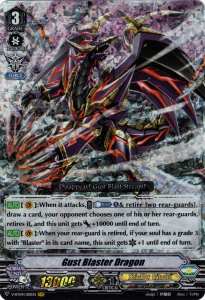 Phantom Blaster Dragon reaches a new level of power. He becomes the powerful Gust Blaster Dragon with Gust Blaster Stream! This black, purple, and red dragon is the ultimate beast from Shadow Paladins. He is also Ren’s new signature card for season two of Cardfight!! Vanguard V. His Gust Blast Stream leads Ren to two major victories in this season.

Furthermore, you need to play cards with the ability to superior call units. Play cards such as Dark Bond Trumpeter. This strategy retains cards in your hand, and you are using your deck to gain resources. Then, you can retire your new rear-guards to pay for Gust Blaster Dragon’s skill. It is a simple an effective strategy for Shadow Paladins.

Finally, Gust Blaster Dragon’s second skill gives him a critical when your rear-guard is retired if your soul as a grade 3 with Blaster in its name. The first skill easily fulfills this requirement. Also, place your Force markers on the vanguard circle to enhance Guster Blaster Dragon. Gust Blaster Dragon will have 43,000 power from its skill and two Force markers and two criticals. This is skill is a strong finisher and pressure your opponent.