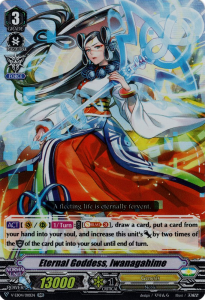 A fleeting life is eternally fervent.

[ACT](VC/RC)1/Turn:COST [Soul Blast (3)], draw a card, put a card from your hand into your soul, and increase this unit’s [Power] by two times of the [Shield] of the card put into your soul until end of turn.

Eternal Goddess, Iwanagahime skill raises her power by times of the shield of a card put into your soul. Therefore, her power rises to 63,000 with a heal trigger placed into the soul and a Force marker. This skill applies a lot of pressure in the early game. Your opponent is unlikely to block the attack without a perfect guard. Checking two critical triggers can seal an early victory for you!

Eternal Goddess, Iwanagahime’s skill requires a lot of cards for her Soul Blast. Therefore, you need to maintain cards in your soul to pay the heavy cost. You can consistently present a major threat every turn. Play cards such as Battle Maiden, Shitateruhime to reduce the skill’s cost. You will consistently play the skill every turn.

However, Eternal Goddess, Iwanagahime is not an unstoppable card. Perfect Guards shut down her offense. I would have liked for her to have an additional skill. A skill with restrictions on guarding would be welcomed. An ability to soul charge would also make her a better card.