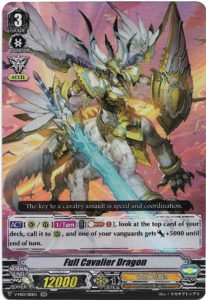 Full Cavalier Dragon is a powerful cosmos dragon and member of the Gold Paladins. He wields a large sword like many dragons in Cardfight!! Vanguard. This card also has an Accel marker. Players can find a place for this card in a Gold Paladin deck. It has good value in the right deck.

Full Cavalier Dragon’s effect superior calls the top card of your deck. The ability is very cheap as it costs a single soul blast. You should use his ability every turn because this ability is an ACT. You consistently superior call a card from the deck every turn. A new rear-guard strengthens your field to be an attacker or booster. In addition, this effect is a useful ability against clans such as Kagero because you can replace a rear-guard after your opponent removes it from the field.

In addition Fuller Cavalier Dragon has synergy with a few Gold Paladins. You want to superior call a card with an ability that triggers after being called to the field by an effect. For example, Listener of Truth, Dindrane activates her ability when an effect superior calls her to the field. You are able to create a chain of combos to generate an advantage.

Finally, Full Cavalier Dragon’s skill helps enable unite and builds your field for a strong offense. Unite will be active when you call two units during your turn. Then, your rear-guards with Unite abilities may activate their effects! Fuller Cavalier Dragon creates a chain of combos as I mentioned the strategy earlier for the standard format.