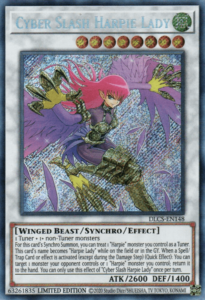 1 Tuner + 1+ non-Tuner monsters
For this card’s Synchro Summon, you can treat 1 “Harpie” monster you control as a Tuner. This card’s name becomes “Harpie Lady” while on the field or in the GY. When a Spell/Trap Card or effect is activated (except during the Damage Step) (Quick Effect): You can target 1 monster your opponent controls or 1 “Harpie” monster you control; return it to the hand. You can only use this effect of “Cyber Slash Harpie Lady” once per turn.

Cyber Slash Harpie Lady is a unique effect to Synchro summon her. For her Synchro Summon, you may treat a Harpie monster under your control as a Tuner. This effect adds consistency and efficiency to play her from the Extra Deck.

Cyber Slash Harpie Lady’s name changes to Harpie Lady when she is on the field or in the graveyard. This effect creates synergy with cards in the archetype. Your deck maintains consistency with your monsters, Spells, and Traps.

For example, you may play Elegant Egotist with Cyber Slash Harpie Lady on the field. Then, special summon a Harpie Lady from your deck. These cards have a nice combo for special summoning a monster to your field.

Finally, Cyber Slash Harpie Lady’s third effect counters your opponent’s strategy. She returns one of the opponent’s monsters or one of your Harpie monsters to the hand when an opponent activates a Trap or Spell. An opponent loses a monster on the field if he or she plays a Trap of Spell.