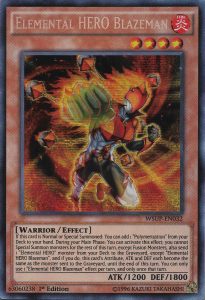 If this card is Normal or Special Summoned: You can add 1 “Polymerization” from your Deck to your hand. During your Main Phase: You can activate this effect; you cannot Special Summon monsters for the rest of this turn, except Fusion Monsters, also send 1 “Elemental HERO” monster from your Deck to the GY, except “Elemental HERO Blazeman”, and if you do, this card’s Attribute and ATK/DEF become the same as the monster sent to the GY, until the end of this turn. You can only use 1 “Elemental HERO Blazeman” effect per turn, and only once that turn.

Elemental HERO Blazeman is ready to deliver justice!  He is one of my favorite cards in my deck. This brave protector has two powerful effects. You may only use on one of his effects per turn. Then, you can use the other effect on your next turn during the duel.

Furthermore, Elemental HERO Blazeman’s second effect also sets up fusions for Parallel World Fusion. The new monster in your graveyard can be used as a resource. Then, a new fusion monster is ready to be summoned to the field. You must wait a turn to play Parallel World Fusion if you have already special summon a monster. You can only special summon monsters by its effect during the turn when you play it.

Finally, I recommend playing Elemental HERO Blazeman in pure Elemental HERO decks. His second effect only searches for an Elemental HERO. You want to the get maximum value from this card. You may encounter inconsistency in other HERO decks such as Destiny HERO and Evil HERO. I always want to be able to search for any monster in my deck instead of having a few options.