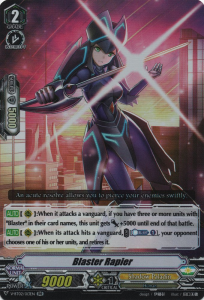 An acute resolve allows you to pierce your enemies swiftly.

[AUTO](RC):When it attacks a vanguard, if you have three or more units with “Blaster” in their card names, this unit gets [Power]+5000 until end of that battle.
[AUTO](RC):When its attack hits a vanguard, COST [Counter Blast (1)], your opponent chooses one of his or her rear-guards, and retires it.

Blaster Rapier is the first female Blaster under Shadow Paladins. She wears black armor like most Shadow Paladins, and her weapon of choice is a rapier. Her skills are not as good as Blaster Dark, but she is not to be taken lightly. She plays a key role in Blaster decks. Her skills are designed to pressure the opposing vanguard.

Blaster Rapier’s first skill increases her power by 5,000 if you have three or more units with Blaster in their names. This requirement is easily fulfilled as long as you play many Blasters in your deck. Blaster Rapier is also able to hit almost every unit without needing a booster. I recommend attacking with her first if you are not going to boost her. A single trigger can increase your opponent’s defenses and prevent Blaster Rapier from hitting his or her vanguard.

Play these cards with Blaster Rapier!

Overall, Blaster Rapier is a great card for Blaster decks. Her skills can shift the momentum of a game in your favor. She packs a punch with her first skill. Then, her second skill retires opposing rear-guards. She complements Blaster Dark and Blaster Dagger. I recommend playing a full set in Blaster decks.