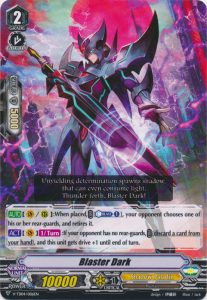 Unyielding determination spawns shadow that can even consume light. Thunder forth, Blaster Dark!

[AUTO](VC/RC):When placed, COST [Counter Blast (1)], your opponent chooses one of his or her rear-guards, and retires it.
[ACT](VC)[1/Turn]:If your opponent has no rear-guards, COST [discard a card from your hand], and this unit gets drive+1 until end of turn.

The knight from the United Sanctuary secret military is one of the braves and strongest warriors in the world. His name is Blaster Dark and he once wielded the legendary weapon Blaster Blade. A legendary card deserves first class treatment. His increased power, new skills, new artworks are fantastic. I prefer the artwork in thumbnail more than the other artwork.

Play these cards with Blaster Dark!

Blaster Dark’s second skill enables Twin Drive if your opponent does not have a rear-guard. You can perform a Twin Drive as early as your second turn in exchange for discarding a card. The skill is really good if you are able to use it. An early twin drive thins your deck quicker for resources. You are able to check triggers sooner for an early advantage and grab key cards for your winning image.