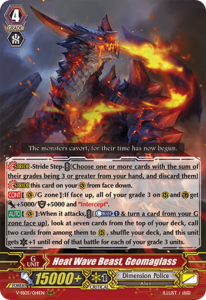 The monsters cavort, for their time has now begun.

[Stride]-Stride Step-COST [Choose one or more cards with the sum of their grades being 3 or greater from your hand, and discard them], Stride this card on your (VC) from face down.
[CONT](VC/G zone):If face up, all of your grade 3 on (RC) and (GC) get [Power]+5000/[Shield]+5000 and “Intercept”.
[AUTO](VC):When it attacks, COST [Counter Blast (1) & turn a card from your G zone face up], look at seven cards from the top of your deck, call two cards from among them to (RC), shuffle your deck, and this unit gets [Critical]+1 until end of that battle for each of your grade 3 units.

Furthermore, the additional 5,000 power to your grade 3 rear-guards is a boost in power. These rear-guards can hit any opponent’s vanguard without a boost. They are always pressuring the opponent.

Heat Wave Beast, Geomaglass and Super Dimensional Robo, Dailiner are a dynamic duo on defense. Their first abilities have a strong synergy. Super Dimensional Robo, Dailiner gives 10,000 shield and the ability to intercept to grade 3 units. Your grade 3 units will have an impressive 15,000 shield from the abilities of these units. A shield of 15,000 is equally as a good as critical trigger’s shield.

Heat Wave Beast, Geomaglass provides a strong offense and rear-guards. Heat Wave Beast, Geomaglass superior calls two cards among the top seven cards of your deck and this beast gains a critical for each of your grade 3 units. Dimension Police is not known for superior calling units. This ability provides a method of gaining resources and offense.

Furthermore, you have the opportunity for five attacks in a single turn. Heat Wave Beast, Geomaglass superior calls two rear-guards from the deck. You may place these new units in the front row to replace rear-guards for additional attacks.

Play these cards with Heat Wave Beast, Geomaglass in the premium format!