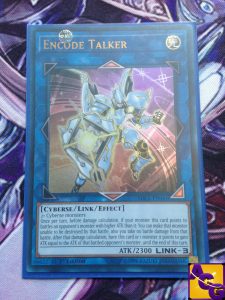 2+ Cyberse monsters
Once per turn, before damage calculation, if your monster this card points to battles an opponent’s monster with higher ATK than it: You can make that monster unable to be destroyed by that battle, also you take no battle damage from that battle. After that damage calculation, have this card or 1 monster it points to gain ATK equal to the ATK of that battled opponent’s monster, until the end of this turn.

Encode Talker is the featured ultra rare card from Structure Deck: Cyberse Link. It  is a Cyberse Link Monster and member of the Code Talker archetype. It currently is only available in Cyberse Link. I like his artwork. His large shield symbolizes his effect.

Play these cards with Encode Talker!

Furthermore, Encode Talker has strong synergy with Cyberse monsters. He provides them protection once per turn as I have already stated. In addition, Encode Talker may also benefit for their effects. Tri-Gate Wizard is a great monster to Co-Link to Encode Talker. This dynamic duo inflicts a lot of damage to the opposition!

However, Encode Talker is not unbeatable. All good things must come to an end. Encode Talker’s effect does not prevent him from being destroyed by battle. Your opponent can destroy Encode Talker by battle or effect. You need to play trap cards to protect Encode Talker.

Overall, Encode Talker is a great card from a structure deck. He is a strong addition to Cyberse decks. You use his skill to overcome many powerful monsters. The skill provides an effective combo when it points to Tri-Gate Wizard. Link your Cyberse monsters to Encode Talker, and get your game on!