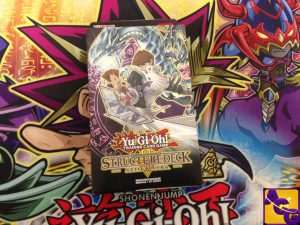 Structure Deck: Seto Kaiba features five new A-to-Z monsters. The new Fusion monsters are ABC-Dragon Buster and A-to-Z-Dragon Buster Cannon. A-Assault Core, B-Buster Drake, and C-Crush Wyvern are the new effect monsters for A-to-Z decks. They do not require Polymerization for Fusion as their fusion is just like contact fusion. Then, you combine them into ABC-Dragon Buster!

These new Fusion monsters are incredible cards. ABC-Dragon Buster’s effect banishes cards from the field! I love cards with the effect of banishing cards. My opponent loses access to one of his or her best cards. Then, A-to-Z-Dragon Buster Cannon negates your opponent’s card’s effects and destroys the cards.

The reprints in Structure Deck: Seto Kaiba are Kaiba’s most recognizable cards. The most important reprints are X-Head Cannon, Y-Dragon Head, and Z-Metal Tank. These cards are the original A-to-Z monsters in Kaiba’s deck. They form XYZ-Dragon Cannon. You also need these cards to combine ABC Dragon Buster and XYZ-Dragon Cannon into A-to-Z-Dragon Buster Cannon.

However, this strategy is very inconsistent. A single structure deck is not constructed to fully support the Union Monsters. The random reprints do not form a well-balanced team with the A-to-Z monsters. You will need to purchase three copies of Structure Deck: Seto Kaiba to make a consistent deck. You also need to remove Kaiba’s signature monsters, and play full sets of the Union monsters.