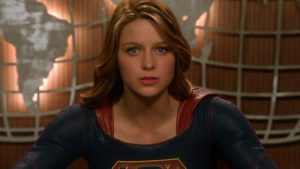 We are given a basic plot in season one. Kara Danvers’s life changes forever after she saves her stepsister Alex. She juggles two lives as Kara Danvers and Supergirl. Supergirl encounters many villains from aliens, local celebrities, and a powerful businessman. Her aunt wants to dominate humanity and a rich businessman wants to control a twisted version of Supergirl. The variety of villains presents different threats that keep the show fresh.

Supergirl is one of the most relatable characters on the show. She is searching for her path in life, and we all once experienced the search for our life’s meaning. This could be our jobs, personal goals for a family, and school. Supergirl struggles to find her life’s meaning throughout the this season. She lives two lives, dates multiple guys, and seeks to be a superheroine out of Superman’s shadow.

Supergirl starts her career as a superhero like a rookie in the NBA. She does not have years of experience. Everything in her career is unknown to her. She has her ups and downs. She makes mistakes that unfortunately anger a few citizens. However, she learns from her mistakes and progresses her abilities.

Furthermore, Supergirl’s progression throughout the season is wonderfully written. She is not a trained solider, and is inexperienced in combat when she starts her new career. She experiences fear during her first mission, and solely relies on her powers to win fights. Alex trains Supergirl to become a competent fighter in combat. Then, she uses her new skills with her powers to defeat powerful enemies.

Supergirl has a few different weakness to keep viewers interested, and this brings a variety of scenarios instead of the usual kyponite in a hat trick. Her own abilities can be used against her. Supergirl’s super hearing can be useful to get information from unsuspecting foes, but it can be a weapon used against her. Extreme sounds can hurt Supergirl’s ears and banishoine’s loud scream makes Supergirl bleed. It is a simple, effective, and unique strategy to use against Supergirl.

Season one is full of building the world in this series. We learn about Supergirl’s unique universe from Krypton to secret government organizations such as the DEO. This is really good storytelling to keep me interested. Season one dives into some of the universe’s lore, and I want to come back for more. Furthermore, this sets up future stories in the following seasons. 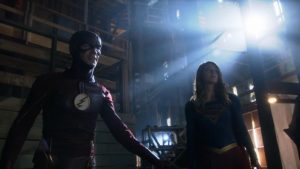 Furthermore, Flash makes a special appearance in the episode Worlds Finest and teams up with Supergirl to defeat Livewire and Silver Banshee. This episode serves as expanding Supergirl’s world and connecting her to other ongoing series. Also, I really like how he teases a future arc about Earth-X’s evil doppelgangers of Supergirl and her allies.

One of the best additions to the show is the DEO. The DEO stands for the Department of Extra-Normal Operations. This secret government agency originally only recorded activities by aliens and arrested alien criminals. Then, the organization expands after Supergirl joins the department. They begin arresting humans with superpowers such as Livewire.

I must ask this one question that is on my mind about the DEO and Supergirl. Is Supergirl a volunteer, part time employee, or full time employee? The show never answers this question. Supergirl quits the DEO for a short period, and John asks her when she will she return to work. She faces zero consequences from leaving her job without proper notice. Any other person would be terminated and never brought back to the organization.

Supergirl uses the concept of monster or villain of the week with a new villain introduced in most episodes. Each villain is able to create tension and be seen as a creditable threat to Supergirl. Each episode builds the evildoer as a threat by defeating Supergirl in their first battle. Then, Supergirl defeats the main villain of the episode in their next battle.

My favorite villain in season one is Maxwell Lord. Peter Facinelli does a fantastic job playing Maxwell Lord. He serves as Supergirl’s Lex Luthor. He is cunning, handsome, resourceful, and rich. Maxwell Lord’s requests for Dr. Pepper are hilarious. His concerns about relations with aliens will come to fruition in season 4. Then, he creates the first evil Supergirl in the show.

Also, Bizzaro is the first of four evil Supergirls, and the first human to gain superpowers from an experiment. The concept of an Evil Supergirl occurs four times in the series at the date of this article. Bizzaro is a great character as I pity her for being Maxwell’s pawn. She was in a coma before Maxwell uses her to create his “Supergirl”. Then, she becomes this monster known as Bizzaro.

My least favorite villains are Astra and Non. They are just as boring as their plot to control mankind. They are original villains for the television series. Astra takes a soft approach to defeat Supergirl in hopes to convert her. She has a multiple opportunities to defeat Supergirl, but she shows mercy to her niece. Non only becomes slightly interesting when he joins forces with Indigo.

I really enjoyed watching James’s and Kara’s relationship blossom. They start as friends, and Jame often lends useful advice to Supergirl. He tells her she can be a heroine without her superpowers. James and Kara start to grow deeper feelings for one another. Then, they eventually confess their love for each other. They end the season with a sweet kiss.

Unfortunately, I feel the need to spoil their short-lived relationship if I can call it that. James and Kara never have their first date. Kara calls off the relationship before it even begins because she believes she does not have time for a relationship. However, she is able to find time for a relationship with Mon-El while she is training him. Of course, she spends a lot of time training Mon-El to be a superhero, but she could had also used that time to spend with James. This is really bad writing.

The Theme of Season One

Season one’s theme is discovering your life’s meaning. Everyone battles internal struggles with their identities, and have positive outcomes. Kara makes the decision to become Supergirl and National City’s superheroine. James discovers what he wants in a relationship. John Jones reveals he is the Martian Manhunter and leads the DEO.

Finally, the characters make this season of Supergirl amazing. Nearly every character has a colorful and memorable personality. Small things such as Maxwell Lord’s love for Dr. Pepper, James’s good advice, Win’s resourcefulness, and Alex’s love for her sister give life to this show. However, Astra’s and Non’s boring personalities hurt the overall quality of the finale. I would have given the season a perfect score if the main villains were more interesting.

Overall, I really enjoyed Supergirl’s first season. I approached the season with an open mind because it brings new concepts for the ironic woman of steel. Supergirl in its first season has everything that it needs to be a successful Season one of Supergirl lays the foundation for its universe. Many relationships with friends, allies, and villains are quickly established. The relationships with Supergirl are very memorable. Each character has a positive impact in her journey.