The hottest superheroines in Marvel are fierce, bold, and powerful characters. They are influential figures their stories. A stellar costume and awesome set of powers also help create the hottest superheroines from Marvel such as Captain Marvel, Black Widow, and Scarlett Witch. These ladies fight justice and they never back down from a challenge!

The rankings are determined by each superheroine’s design, costume, personality, and story. I am considering adaptations from comics, movies, and television shows. Only the hottest superheroines from Marvel will make the list. 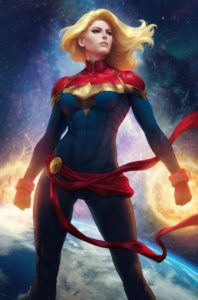 Furthermore, Captain Marvel has impressive superpowers. These unique powers make her to be one of the strongest superheroes. She has super strength, durability, the ability of flight, and the ability to project energy. She also has the ability to absorb most types of energy.

In addition, Captain Marvel is a member of the Avengers. She joins the team of superheroes during Scarlet Witch’s leave of absence. She quickly proves herself to be a valuable member of the team. 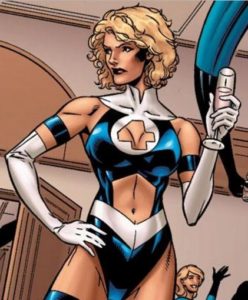 In addition, Invisible Woman has a variety of costumes. Her best costumes are her classic look and her design from the 90s. The captivate her physical and inner beauty. Invisible Woman is a stunning and powerful superheroine. 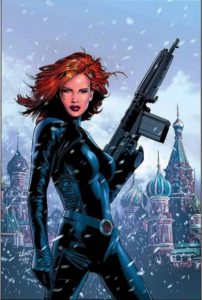 Black Widow is one of the hottest superheroines in comics. Her black bodysuit, pretty face, fearlessness, and strong personality are some of her best features. Black Widow is a member of the Avengers. She is a capable heroine and reminds cool under pressure.

Black Widow also uses her beauty as a weapon, and it is a reason for her high rank on this list. Unsuspecting victims are instantly charmed by her good looks. Black Widow had a romance Tony Stark to infiltrate Stark Industries when she was a member of KGB. 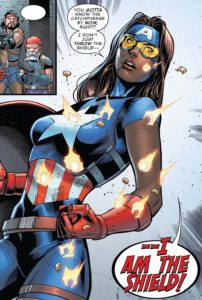 Captain America has an impressive set of superpowers. She inherited the powers of parents, Luke Cage and Jessica Jones. Therefore, she has superhuman strength, stamina, and durability. Captain America also has the ability of flight like her mother.

Captain America is a member of the U.S. Avengers. She has defeated the Golden Skull and Doctor Doom. Her impressive powers make her to be a major force on the Avengers. 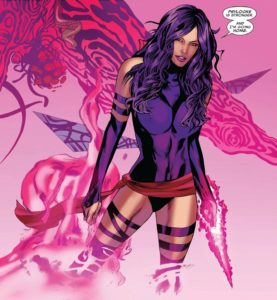 Psylocke also known as Elizabeth Braddock is one of Marvel’s most attractive superheroines. Her beauty is only the surface of this superheroine. She is a powerful mutant due to her abilities. She is a mutant with telepathic powers and a member of the X-Men. She becomes a valuable member of the team.

Marvel develops her character in a unique story through different series. Marvel originally introduces her in Captain Britain Vol 1 8, and she is one Captain Britain’s twin sister. She also holds the title of Captain Britain in the Otherworld. Psylocke also appears in X-Men when she becomes a member of the team of mutants.

Furthermore, Psylocke has a strong set of powers. She has powerful telepathic and telekinetic abilities. Psylocke has the ability to affect the mind of others people. One of her most impressive abilities is her telekinetic sword. 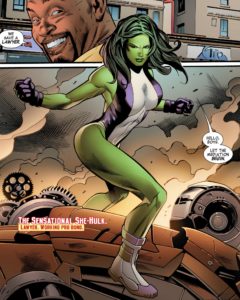 She-Hulk is one of the best female characters in comics. She is a smart attorney and a powerful superheroine. She has the brains and power to defeat evildoers.

Jennifer Walters becomes She-Hulk due to her cousin Bruce Banner, the Hulk saving her life with a blood transfusion with his blood. She-Hulk mains her intelligence unlike the Hulk. She is a green amazon with superhuman strength, speed, and durability

In addition, She-Hulk is a sensational superheroine because she fights heroines with her fist and the law in the courtroom. She-Hulk becomes a member of the Avengers. She also joins the Fantastic Four. She is also the assistant distract attorney in New York and an attorney for heroes for hire.

Furthermore, She-Hulk’s basic costume is a great design for her character. She shows her muscles to display her powerful physique. She has the look of a beautiful heroine with a pretty face and a powerful heroine with solid muscle. 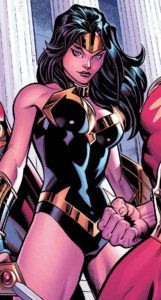 You may instantly think this heroine to be Wonder Woman at first glance. This heroine is Marvel’s version of Wonder Woman, and her name is Power Princess. She has a similar and beautiful design as DC’s famous Amazonian. Power Princess is a member of Squadron Supreme of America.

Power Princess is a merciless, powerful, and selfish superheroine. She also enjoys the thrill of a good fight. She can be brutal in battle.

In addition, Power Princess is one of the strongest superheroines in Marvel. She has super strength. super stamina, flight and other powers. Her braces are bound to her soul, and she return them to herself. Power Princess also wields the rainbow axe.

Furthermore, Power Princess has an awesome and provocative costume. The colors are black and gold. These colors perfectly representative her personality and status from her island. She has the regal look and matches her strong character. 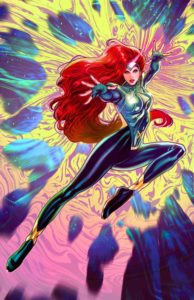 Jean Grey has the beauty of the phoenix and the power of a phoenix. She is one of the hottest and most powerful superheroines in Marvel. Jean Grey is a powerful mutant with telepathic abilities. She is a member of the X-Men.

In addition to her natural abilities, Jean Grey is able to become Dark Phoenix with the power from the Phoenix. She becomes a destructive force of nature. She is a danger to the entire universe under the Phoenix’s corruptive influence. 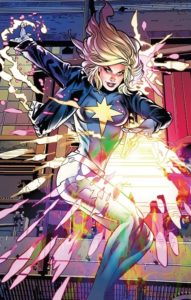 The Dazzler is a true superstar among superheroines. She is a famous singer with a huge fan base. She is also a mutant with the unique ability to convert sound into powerful forms of light.

Dazzler is the unique combination of a heroine and celebrity. She first becomes famous with her beautiful voice and she is a lead singer. She also uses her powers to create an amazing display of color for her performances on stage. Her voice and powers grew her popularity and attracted the attention of the Hellfire Club and X-Men.

Furthermore, Dazzler’s career leads her to heroism. Dazzler joined the X-Men on various occasions and the Agent of S.H.I.E.L.D. She helps the team of mutants team vampires in San Francisco. 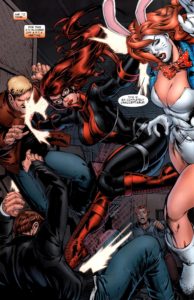 Jackpot is a a registered superhero in Brooklyn and she gains her power of superhuman strength from Lot 777. She occasionally teams up with Spider-Man. They are a formidable duo for any evildoer.

Like Spider-Man, Jackpot learns the lesson of  power includes responsibility. The second woman with the title dies and Sara’s husband loses his life at the hand of villainous Rose. Sara resumes her role as Jackpot.

In addition, Jackpot’s only superpower is superhuman strength. She is stronger than the average thug on the streets. She uses her powers to defeat and get revenge against Rose. 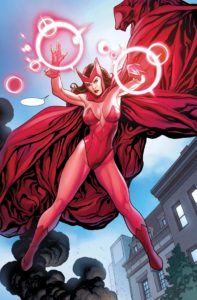 This mutant in her red attire is the daughter of the X-Men’s greatest foe, Magneto. Scarlet Witch is one of Marvel’s hottest superheroines with some of her various adaptations. She has associations with the X-Men and Avengers.

Furthermore, Scarlet Witch is a powerful sorceress with impressive powers. She is a user of chaos magic with the ability to warp reality with hexes. Scarlet Witch also the abilities of flight, energy manipulation, telekinesis, and other powers. 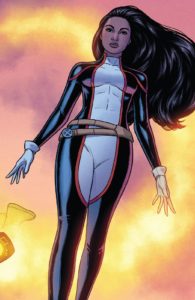 Monet St. Croix aspires to be the prefect mutant in beauty, personality, skills, and abilities. She is one of the most powerful mutants. She can nearly do anything with her powers and has genius level intellect. Some of her powers durability, flight, superhuman strength, superhuman speed, telepathy, and many other powers.

Furthermore, Monet St. Croix’s second X-Factor costume has an awesome design. It highlights her perfection and beauty. The black and white costume complements her beauty and it is one of the reasons for her being one of Marvel’s hottest superheroines. 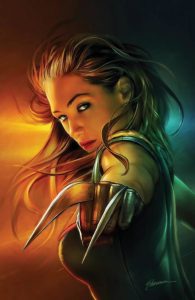 X-23 is one of the hottest female versions of a superhero. She is a killer in looks and her ability in combat. She has superhuman senses, the ability to regenerate, and many other superpowers.

Furthermore, X-23 has a unique story from Marvel. She is a mutant with Wolverine’s DNA and his daughter through an experiment by Sarah Kinney from the Facility. This design naturally gives Wolverine’s set of powers to X-23.

X-23 dons a variety of appealing costumes. Her two best costumes are her black costume and her version of Wolverine’s costume. She has the perfect look for the perfect killer. Her beauty, confidence, and attire reflect her confidence in combat. 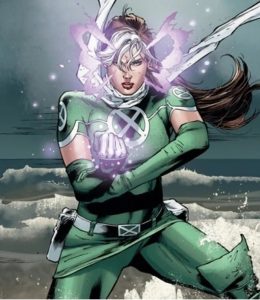 Rogue is a unique superhero with an amazing power from Marvel. She experiences a life of crime and earns redemption. Her origins began her life in villainy with Brotherhood of Evil Mutants. However, Rouge has a face turn and joins the X-Men. She is one of the strongest mutants in the world due to her unique ability of copying powers.

Rogue has the uncontrollable power of absorbing energy from people with physical contact. She temporary gains their powers, talents, and memories. It gives her a major advantage against opponents. Rogue weakens her enemies and she gains strength in the process.

Furthermore, Rogue is famous for stealing Captain Marvel’s power and memories. It is one of the iconic moments in Marvel’s history. Rogue becomes one of the most powerful mutants after this event. She has the combination of her powers to temporary stealing enemies’ powers and the powers of Captain Marvel.

Rogue is one of the most appealing heroes from Marvel. A single kiss from Rouge can seriously damage a person. Her husband, Gambit experiences her power when they shared their first kiss. 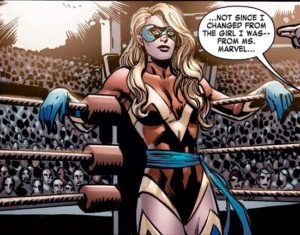 Sharon Ventura is actually the second character with the title of Ms. Marvel. She gains her powers from the Power Broker, and she is one of the few characters without any negative side effects from the strength augmentation. Ms. Marvel joins the Fantastic Four and she becomes a valuable member on the team due to her powers. She helps the Fantastic Four defeat powerful villains such as Doctor Doom.

Furthermore, Ms. Marvel gets her costume from Unlimited Class Wrestling Federation. It was originally intended to be her costume as a professional wrestler. She wears the costume in her persona of Ms. Marvel. The costume has a similar design to Carol Danver’s red costume.

I would have ranked Ms. Marvel much higher on the list if Marvel did not remove her beauty. She becomes She-Thing with a similar look to The Thing from the Fantastic Four. This radical change of her look stripped the heroine of her beauty. This change also affects her character and plots with the Fantastic Four.

All in all, Marvel has many beautiful, confident, and strong superheroines. Captain Marvel, Black Widow, and Marvel Girl are just three of the best heroines from Marvel. They essential and awesome characters in their stories. These ladies have the skills and powers to takedown villains in their universe.