Superheroes are icons in pop culture and fiction. They are the role models for readers. Their stories and personalities inspire fans from around the world. The best superheroes have a long impact in culture. Superman, Batman, Captain America, and many other characters are still popular today after sixty years.

Furthermore, new legacies are emerging from comics. Superheroes in the modern era from independent publishers are gaining attention such as The Boys. Starlight and Invincible are becoming icons for today’s audience.

I am ranking the ten best superheroes in my opinion. The best superheroes are iconic characters with amazing superpowers or abilities, memorable costumes, and unique personalities. I based the list on a superhero’s accomplishments, powers, costume, and stories. 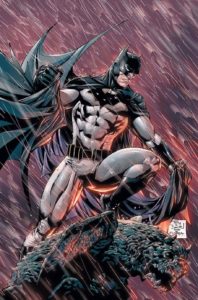 Batman is one of the most popular superheroes from comics. The rich hero has a tragic backstory of his parents’ death at the hands of a criminal. This tragic shaped him to become the dark knight of Gotham.

Batman is a great role model for his selflessness. He is a rich businessman, and he gives back to the city. He donates money as Bruce Wayne and he fights crime as Batman.

Batman fights crime in Gotham and he is one of the founding members of the Justice League. He uses his intelligence, gadgets, and skills in combat. He is a great detective with the ability to solve any crime from Gotham’s worst crimes like the Joker and Riddler.

Furthermore, Batman has strong bonds with his comrades in the Justice League. Him and Superman are best friends. Batman has a romantic interest in Wonder Woman in some adaptations.

Batman is one of the rare superheroes without any powers. He relies on his experience, skills in combat, and equipment to fight crime. He has been able to defeat stronger foes with his superior skills and equipment. Batman has a gadget for every situation.

One of Batman’s most impressive moments is dodging Darkseid’s omega beam in Justice League Unlimited. His elite skills impress Darkseid. Batman is the first person to dodge the omega beam.

A superhero without powers needs the best equipment and Batman can afford the best weapons. Batman has a large arsenal of weapons and vehicles. He has the bat claw, gauntlets, batarangs, and other items. He stores his smaller weapons in his utility belt.

Furthermore, the batarang is Batman’s signature weapon. It is a sharp weapon with the shape of a bat. Batman chooses this weapon over guns because he rejects firearms under more circumstances. There are also many version of the batarang. 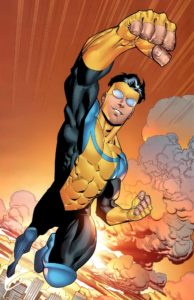 Invincible has a brilliant story by Robert Kirkman. Most of Mark Grayson’s childhood is a lie. He believed his father, Omni-Man  was a superhero, but his father was truly a villain. He faced stressful and horrible events such as betrayal from  Omni-Man, his encounter with Anissa, and deaths of comrades.

Invincible grows to become a strong superhero, good husband, and loving father. He marries his longtime girlfriend and fellow superhero, Atom Eve. He becomes the leader of the Viltrumites from his bloodline, but he truly earns his respect from his acknowledgments and strong leadership.

Invincible is half human and half Viltrumite. His heritage from the Viltrumites gives many powers to him. Due to human’s similar biology to Viltrumite, Invincible has the potential to become as powerful as any pure-blooded Viltrumite

.Furthermore, Invincible has superhuman strength, superhuman speed, flight, and other powers. He is one of the strongest superheroes from his universe. His superhuman speed also provides great relaxes. He is able to dodge bullets. 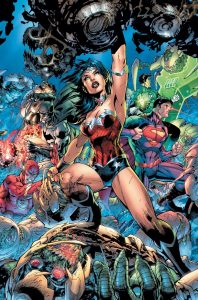 Furthermore, Wonder Woman is a role model for everyone. She is a strong woman with good values. She fights injustices on different worlds. Wonder Woman embodies the ideas of justice and freedom.

Furthermore, Wonder Woman has impressive superpowers because she is a demigoddess. She is one of the strongest superheroes in DC Comics. She has the abilities of flight and superhuman speed.

In addition, Wonder Woman’s divine equipment enhances her abilities and gives purpose to her armor. Her Lasso of Truth forces evildoers to speak the truth. Her Bracelets of Submission deflect bullets for protection. 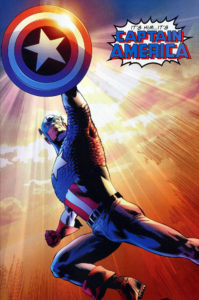 Captain America is the first Avenger and the leader of the Avengers. He fights for justice for all citizens. He strongly believes in the American Dream.

The quality about Captain America’s personality is his dedication to American values. He does not care about an organization’s or individual’s political party. He believes in truth and justice for everyone. Captain America does not put an person or group above democracy.

Captain America has super strength, speed, stamina, and recovery. He has longevity because his cells do not age. The enhancement of his abilities allows him to defeat evildoers with superpowers.

Captain America’s shield is the most iconic weapon in comics.  Captain America uses the shied for offense and defense. He can toss it as a projectile and it will bounce back to him. The shield also protects Captain America from bullets and lasers. 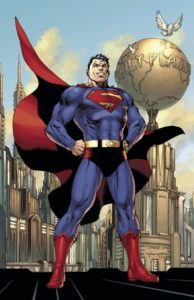 Superman is the ultimate pillar of justice and morality. You could say, he is the perfect superhero. Superman has save the world on numerous occasions. He has overcome some of the most dangerous villains in the universe.

Superman has the blessings of great powers. His sense of morality makes him to be a great superhero. Superman chooses to use his superpowers for good. He is a loving husband to Lois Lane. He is a strong leader for the Justice League. Superman as Clark Kent is a great report for the Daily Planet.

Superman is one of the most powerful superheroes in comics. He has superhuman strength, superspeed, invulnerability, heat vision, flight, super hearing, and many more powers. He has the perfect set of superpowers. Superman has an answer to defeat any villain.

Furthermore, the man of steel has amazing feats. Superman defeated the Darkseid in major battles for the future of the universe. Superman also held a black hole that was the power source for the villainous Mnemon.

Superman’s most famous weakness is his vulnerability to Kryptonite. Superman loses all of his power when he experiences exposure of kryptonite. Super villains have a major advantage against him in a weaken state.

Superman is also vulnerable to magic. His superhuman strength and durable body cannot protect him from magic. Villains such as the Wizard can effectively use their magical abilities against the man of steel. 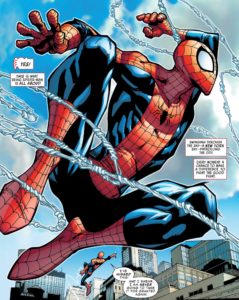 Spiderman is your friendly superhero from New York city. His true identity is Peter Parker. He is one of Marvel’s most popular superheroes.

Peter Parker gained superpowers after he was bitten by a spider. He developed the physiology of a spider. Therefore, the superhero, Spiderman was born!

Furthermore, Spiderman shares abilities with spiders. He is able to crawl on walls. He has spider-sense to detect danger. 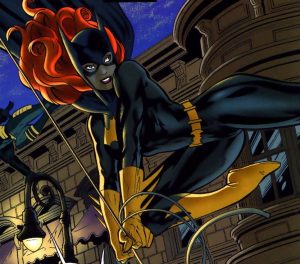 DC Comics introduced Batgirl in Detective Comics #359 (January 1967). She has become one of the most popular and successful superheroines. Batgirl is the first female counterpart of Batman She has a rich history in DC Comics. Barbara Gordon becomes Batgirl with good motivations to protect her city of Gotham.

Furthermore, Batgirl has a unique relationship with her father Jim Gordon, who is the commissioner of Gotham City’s police. She has a strong responsibility to keep her identity as a superheroine a secret. Any public exposure would put a target on her father and entire family.

Like Batman, Batgirl does not have superpowers. She relies on her skills. Batgirl has skills in judo and karate. Her father, Jim Gordon enrolled Barbara Gordon in self-defense classes at an early age. She continues building her skills.

Batgirl uses a variety of weapons and vehicles. She uses grappling hooks to quickly travel throughout Gotham at night. Her signature weapon is the batarang. 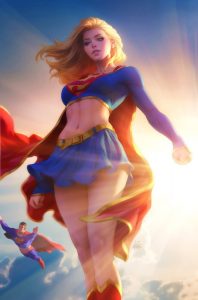 Supergirl is one of the best superheroes in the genre. I am only considering her character from the comics. She is a strong woman in her boots, and she is not a copy of Superman. Supergirl is not live in Superman’s shadow.

For instance, Supergirl does not hold back in fights, and she is less forgiving than her cousin. Supergirl seeks revenge against anyone, who caused the destruction of Krypton. She has a journey in space to find answers about her world’s destruction.

Furthermore, Supergirl struggles with the destruction of Krypton. She lost her parents, friends, and culture. Her entire life changes. Unlike Superman, Supergirl has memories of Krypton. Supergirl is a strong character for enduring this pain of lost.

Supergirl is one of the strongest superheroines from DC Comics. Supergirl is a Kryptonian, and she shares the same powers as Superman. She has superhuman strength, super speed, and the ability of flight. Supergirl also has invulnerability, and she can see through most objects.

Furthermore, DC Comics suggests Supergirl has the potential to be strong than Superman. Her cells absorbs solar energy more efficiently radiation than her cousin. This ability gives her a major advantage against evil Kryptonians. 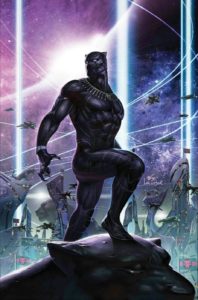 Black Panther has more responsibilities than the average superhero. Black Panther is the head of state of the African country of Wakanda. He is the nation’s religious leader and commander in chief.

The greatest strengths of Black Panther are also his weaknesses. Strong smells, loud noises at high levels, and bright lights can overwhelm him due to his strong senses. These particular things are intense to Black Panther. 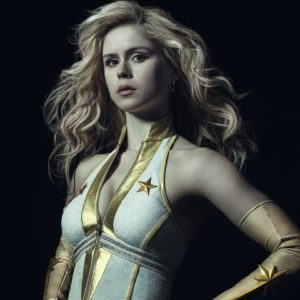 Starlight earns her spot on this list for her trails and tribulations. She overcomes a evil organization of superheroes without ill intentions. She faces assault from a horrible comrade in The Deep. The pressure from the media, Vought, and her personal relationship challenge her. Starlight is the star of hope from The Seven.

Starlight is one of the few true superheroes from Vought. She joined The Seven with good intentions to help people. Starlight wants to change the world for good.

The source of Starlight’s powers is compound-V. Her mother gave the serum to Starlight in exchange for money from Vought. She basically uses her daughter Starlight for money.

Furthermore, no villain can shatter Starlight’s courage. She does not back down from battles against Black Noir and Stormfront. She stands up to The Deep and A-Train for their immorality.

Starlight’s signature ability is absorbing electricity. She can project blasts of electricity at her enemies. She can blind her opponents with her energy as light. Starlight can also stun enemies such as Stormfront.

In addition, Starlight has superhuman strength, superhuman durability, and superhuman recovery. These powers aid her in combat. She can punch holes through walls and lift heavy objects.

However, Starlight’s durability has limitations. A regular human cannot harm. Superheroes such as Homelander and Stormfront can damage her body.

Overall, a list of the best superheroes is a difficult task. The genre has heroes from many series such as DC, Marvel, and The Boys. Iconic superheroes such as Batman and Superman earned their spots on the list. Modern characters like Invincible are fantastic superheroes with amazing stories and development.

My list may not feature your favorite superhero. Please share you opinions and list of top superheroes in the comics. I look forward to everyone’s opinions!