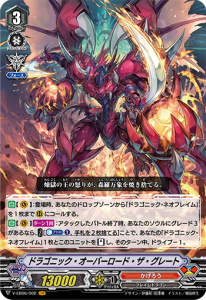 The wrath of the king of purgatory will reduce all of nature to ashes.

[AUTO](VC):When placed, call up to one “Dragonic Neoflame” from your drop zone to (RC).
[AUTO](VC)1/Turn:At the end of the battle it attacked, if a grade 3 is in your soul, COST [Counter Blast (1) & discard two cards from your hand], [Stand] this unit and one of your “Dragonic Neoflame”, and they get drive -1 until end of turn.

Dragonic Overlord the Great is the next evolution of the Dragonic Overlord! The flame dragon from the Dragon Empire has reached a new level of power.His new allies have joined him on the battle against Link Joker. Kai plays the new Overlord in his second deck in Cardfight!! Vanguard V. This card is Kai’s ace vanguard in the second half of the first season.

Play these cards with Dragonic Overlord the Great

Dragonic Overlord the Great’s second skill stands himself and one Dragonic Neoflame at the end of your vanguard’s battle. This skill is one of the best offensive skills in Kagero as you gain two additional battles. Furthermore, your vanguard is pressuring your opponent into a corner. It is very difficult for your opponent to block two consecutive attacks from a vanguard without two Perfect Guards. Then, Dragonic Neoflame is waiting for its chance to burn your opponent.