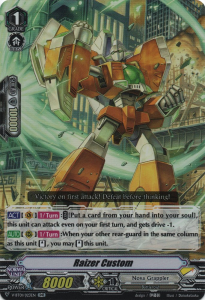 [ACT](VC)1/Turn:COST [Put a card from your hand into your soul], this unit can attack even on your first turn, and gets drive-1.
[AUTO](RC)1/Turn:When your other rear-guard in the same column as this unit [Stand], you may [Stand] this unit.

Raizer Custom returns to Cardfight!! Vanguard with two new skills and new art. His new skills elevate Nova Grapplers. I also like his new art better than his original art. His new card is sharper with more details of action in the background. You can pull this card from a box of Unite! Team Q4.

Raizer Custom’s ACT skill is a unique ability. He has the option to attack even on your first turn. It is the first skill with this ability in the game. This skill fits Nova Grappler’s strategy of rushing your opponent. However, you lose your drive check during this attack because Bushiroad needed to balance the card.

Play these cards with Raizer Custom!

Finally, Raizer Custom is a generic card for both formats. There are so many combs that work well with this card. I have played him in all of my Nova Grappler decks. He fits in any deck because many Nova Grappler units have the ability to stand or stand units in battle. You can play him with Victor, Raizer, and generic decks.

Overall, Raizer Custom is one of the most effective rear-guards in Nova Grappler. He sets the bar for Nova Grappler’s rear-guards in the back row. I recommend playing a full set in decks for both formats. His second skill gives him most of his value. You want your rear-guards to have multiple attacks every turn, and a booster for the extra attacks is a very valuable card.