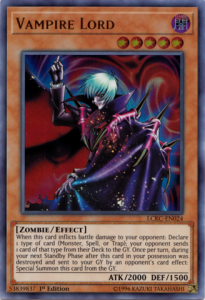 When this card inflicts battle damage to your opponent: Declare 1 type of card (Monster, Spell, or Trap); your opponent sends 1 card of that type from their Deck to the GY. Once per turn, during your next Standby Phase after this card in your possession was destroyed and sent to your GY by an opponent’s card effect: Special Summon this card from the GY.

Vampire Lord is a wicked monster from the early days of Yu-Gi-Oh! He lives up to this name. Vampire Lord’s skills fit the theme of vampires sucking the life out of people. I like effects that fit a character’s theme. His sucks the resources out of your opponent’s deck. In addition, he is not an easy monster to defeat. He returns from the graveyard to continue draining your opponent’s deck of its resources.

Play these cards with Vampire Lord!

Vampire Lord’s second effect is a unique ability. You special summon him from your graveyard during your next Standby Phase if he was destroyed by an opponent’s card effect. This skill makes permanently destroying Vampire Lord difficult. Many cards in Yu-Gi-Oh! destroy other cards by effects. However, Vampire Lord’s second effect does not work if he was destroyed by battle or banished by an effect. Your opponent must take a risk by declaring an attack if he or she wants to destroy Vampire Lord.

Overall, Vampire Lord is a fantastic card with unique effects. I would love to make a deck for this card. Destroying my opponent’s deck would be an amazing experience for me, but my opponent may not enjoy the game. The first effect can ruin an opponent’s deck. They would lose key cards for their strategy, and are forced to improvise their plan. Furthermore, Vampire Lord refuses to stay dead and returns to the field.