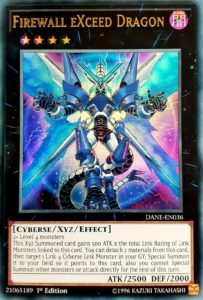 2+ Level 4 monsters
This Xyz Summoned card gains 500 ATK x the total Link Rating of Link Monsters linked to this card. You can detach 2 materials from this card, then target 1 Link-4 Cyberse Link Monster in your GY; Special Summon it to your field so it points to this card, also you cannot Special Summon other monsters or attack directly for the rest of this turn.

Overall. Firewall eXceed Dragon is a great card to pair with Firewall Dragon and other Cyberse monsters. The effects are amazing for the archetype. This card has a lot of potential to improve in the future. Cyberse Link Monsters from future sets will add more options to link to it. I recommend play one or two copies of it in a Cyberse deck.