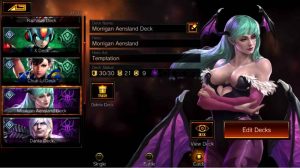 Videos and images of Capcom’s secret card game were revealed on YouTube from Duel Links Meta. Capcom selected online streamers to test their upcoming game Project Battle. It is an online and mobile trading card game of Capcom’s characters from various franchises. The trading card game is action orientated with a unique style. However, the game does not have a release date at this time.

The game features Cpacom’s most popular characters such as Chun-Li, MegaMan X, Morrigan Aensland, and Albert Wesker. Have you ever wondered who would win a fight between Ryu from Street Fighter and Albert Wesker from Resident Evil? These dream showdowns are now a reality in Project Battle. These characters clash in an epic battle with their allies. Players choose their favorite character from Capcom and battle their rivals online. You can play with your friends or random people from the internet. 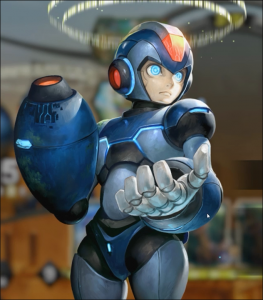 I also like Mega Man X’s new art for Project Battle.  Mega Man X looks ready for battle, and is determined to win the game. He also looks more mature than every version of Mega Man X. His armor is darker than its counterpart from the video games. Furthermore, there are pictures of an injured Mega Man X on a card.

Duel Links Meta’s video is a tutorial of the game. Each player chooses a character for his or her avatar. Then, both players build a deck of 30 cards. The game has two types of cards. The types of cards are unit cards and action cards. Their cards assist them in battle to defeat their opponent.

Project Battle takes elements from other trading card games, and molds those ideas into this game. Your character is basically your vanguard in Cardfight!! Vanguard. Your units are similar to creatures in Magic the Gathering. You must destroy your opponent’s creatures before attacking your opponent. In addition, action cards appear to be similar to Spell cards in Yu-Gi-Oh to give special abilities!

Furthermore, the NP Gauge is similar to resources such as land from Magic the Gathering. It is a common method to balance trading card games. We do not want games without requirements to play the strongest cards. You must meet a card’s requirements before you can play it. Then, you can activate the card when you have the resources to pay the cost.

Unfortunately, this card game is an online game, and will not have a physical product. I prefer playing physical cards because I interact with people in person. I meet new people, make friends, and establish a community at my local card shop. This is how I started the small group for Cardfight!! Vanguard at my local shop. I hope Capcom will consider making a physical version of this game.

Project Battle appears to be an interesting game, and I will give it a try when it is released. I want to play Mega Man X because I am a huge fan of the Mega Man franchise. There are also many interesting characters such as the wicked Albert Wesker. If this game is successful, then I would like Capcom to make a physical copy of the game. Then, I could experience the game at my local card shop.

What do you think of this game? Will you give it a try?