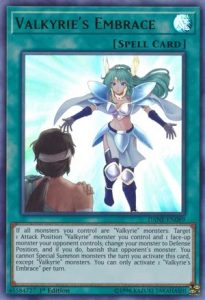 Play these cards with Valkyrie’s Embrace!

Overall, Valkyrie’s Embrace is an amazing spell card to play in every Valkyrie deck. I believe banishing monsters is a powerful strategy to counter many decks. Your opponent loses access to his or her best monster. I recommend playing a full set of three copies of Valkyrie’s Embrace in your deck. It is a consistent and effective card.