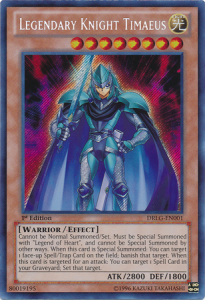 Legendary Knight Timaeus banishes one face-up Spell or Trap on the field when he is special summoned. This effect is useful for removing your opponent’s card from the field. In addition, face-up Spells and Traps are often powerful cards such as Field Cards, and you want to remove those cards. However, this effect is very limited. You cannot banish face-down Spells and Traps.

Legendary Knight Timaeus’s second effect sets a Spell card from your graveyard when he is targeted for an attack. This skill is useful for regaining a card from your graveyard. However, the effect is too slow to be effective in games. You are unable to activate this card on the same turn when it is set. Furthermore, Legendary Knight Critias has a similar effect for Trap cards. The only difference is the Trap card from Critias can be activated on the same turn.

Unfortunately, Legendary Knight Timaeus is an extremely difficult card to special summon. He can only be summoned by Legend of Heart. Then, Legend of Heart requires you to play 2,000 life points, tribute one warrior, and banish up to three Legendary Dragons from your hand or graveyard. The requirements are far too demanding, and a deck is unable to consistently fulfill the requirements. They make Legendary Knight Timaeu  almost unplayable.

Overall, Legendary Knight Timaeus is one of the worst cards from Dragons of Legend. I am very disappointed in this card because it is a great card in the anime. Unfortunately, I do not recommend playing this card in your deck. It is very difficult to summon to the field. He requires too many resources to special summon.