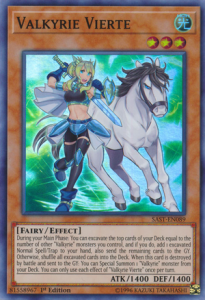 During your Main Phase: Excavate cards from the top of your Deck equal to the number of other “Valkyrie” monsters you control, and if you do, add 1 excavated Normal Spell/Trap to your hand, also send the remaining cards to the GY. Otherwise, shuffle all excavated cards into the Deck. When this card is destroyed by battle and sent to the GY: Special Summon 1 “Valkyrie” monster from your Deck. You can only use each effect of “Valkyrie Vierte” once per turn.

Valkyrie Vierte is a level 3 Fairy monster. I think her artwork is one of the best artworks in the archetype. She is a member of the Valkyrie archetype. Her offensive and defensive stats are not impressive, but her effects make her a strong card in Valkyrie decks. Her effects make the deck more consistent by gaining key cards.

Valkyrie Vierte’s first effect excavates cards from the top of your deck as the same number of Valkyries on your field. Then, you add one excavated Normal Spell or Trap to your hand. This skill is amazing for gaining a free card every turn. You can slightly expand your resources by having two or three Valkyries on the field. You will gain one of the deck’s key Normal Spell cards such as Goddess Skuld’s Oracle

Play these cards with Valkyrie Vierte!

Overall, Valkyrie Vierte is a great card for Valkeryie decks. Her effects give advantages to you by adding cards to your hand or field. You are basically drawing two cards every turn. In addition, this effect helps set up your Goddesses on the field. I recommend playing two three copies of Valkyrie Vierte in your deck to take full advantage of her effects.