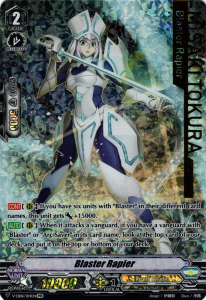 The knights of light will pursue the hope as long as they live.

Blaster Rapier makes her debut as a Royal Paladin. The original card is a Shadow Paladin from both eras of Cardfight!! Vanguard. The Royal Paladins have the best version of Blaster Rapier. She has two phenomenal skills to enhance your Blaster decks. I also love her special art of Misaki being Blaster Rapier.

Blaster Rapier’s first skill gives her 15,000 power when you have six different units with Blaster in their names on the field. She swings a strong attack that rises to 33,000 power with a boost from Blaster Dagger (Royal Paladin)! In addition, her power rises to 43,000 with a force marker and boost! This skill makes her one of the strongest rear-guards in the game. This lady hits hard and pressures your opponent.

However, her skill’s requirement for six Blasters is difficult to achieve. You will encounter inconsistency with this skill. The standard format does not have enough cards to make a pure deck with Blasters. Your field will not always have the proper cards to trigger the first skill. This problem will vanish as soon as Bushiroad releases more Blasters for the standard format.

Play these cards with Blaster Rapier in the standard format!

Blaster Rapier’s second skill is a homage to Misaki and her Oracle Think Tank deck. This skill allows you to look at the top card of your deck, and you may put it on the top or bottom of your deck. This skill helps you check triggers during your twin drive. It also helps you cycle through your deck for other cards. Her skill is also useful to placing your triggers on the bottom of the deck to counter Wandering Starhulk Ruler, Brandt.

Finally, Blaster Rapier is a very strong card in the premium format. This format has more units with Blaster in their names. It is easier to fulfill her first skill’s requirement. Furthermore, she has a lot of synergy with many classic cards from Cardfight!! Vanguard G. You can use Holy Dragon, Leight Sword Dragon and Divine Knight of Twin Absolutes, Saint of Twin Sword to search for this card in your deck.

Play these cards with Blaster Rapier in the standard format!

Overall, Blaster Rapier (Royal Paladin) is a valuable card in the standard and premium formats. I recommend playing a full set in decks in both formats. Blaster Rapier  is a great card for Blaster decks. She is the perfect guard to strengthen your offense. I would call her in the front row with my vanguard and Blaster Blade.