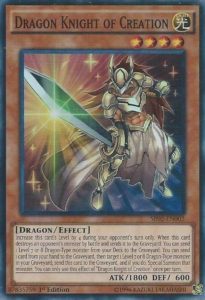 Dragon Knight of Creation sends one level 7 or 8 dragon from your deck to the graveyard after he destroys an opponent’s monster in battle. This effect sets up plays with many cards that want dragons in your graveyard. You can those the effects of those cards to gain advantages.

For example, Arkbrave Dragon is a good target for Dragon Knight of Creation. Arkbrave Dragon from the graveyard special summons a level 7 or 8 dragon with a different name from your graveyard. You gain a strong monster from this combo.

Furthermore, you may use the second effect to set up future activations of this effect. You may discard a level 8 dragon for the cost. Therefore, your graveyard has another level 8 dragon to special summon. The conditions are set to reuse this effect.

Play these cards with Dragon Knight of Creation