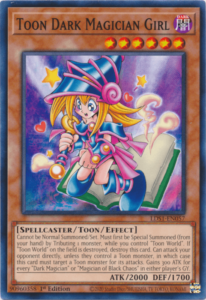 Cannot be Normal Summoned/Set. Must first be Special Summoned (from your hand) by Tributing 1 monster, while you control “Toon World”. If “Toon World” on the field is destroyed, destroy this card. Can attack your opponent directly, unless they control a Toon monster, in which case this card must target a Toon monster for its attacks. Gains 300 ATK for every “Dark Magician” or “Magician of Black Chaos” in either player’s GY.

Yu-Gi-Oh! episode 149 introduces Toon Dark Magician Girl. Alister plays this card in his deck while he was disguised as Maximillion Pegasus. Alister summons this card during his duel against Seto Kaiba.