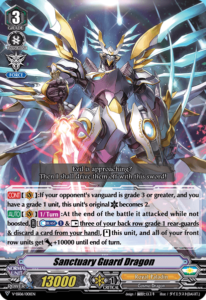 Evil is approaching? Then I shall drive them off with this sword!

[CONT](VC):If your opponent’s vanguard is grade 3 or greater, and you have a grade 1 unit, this unit’s original [Critical] becomes 2.
[AUTO](VC)1/Turn:At the end of the battle it attacked while not boosted, COST [Counter Blast (1) & [Rest] three of your back row grade 1 rear-guards & discard a card from your hand], [Stand] this unit, and all of your front row units get [Power]+10000 until end of turn.

Sanctuary Guard Dragon’s original critical becomes two if you have a grade one rear-guard and your opponent’s vanguard is grade 3. You can deal two damage with a single attack. This ability puts a lot of pressure on an opponent. Sanctuary Guard Dragon can deal up to five damage if he has an Imaginary Gift: Force II and two critical triggers.

This ability is a strong finisher in the late game. Sanctuary Guard Dragon pressures the opponent with two powerful attacks. In addition, your rear-guards in the front row swing strong attacks.

Furthermore, the cost of this ability is fantastic. Sanctuary Guard Dragon maintains twin drive. You will discard a card for the cost, but you will regain it with the next drive checks. Your grade one units cannot boost units, but your units in the front row gain 10,000 power. You are not losing your advantage.

Play these cards with Sanctuary Guard Dragon in the standard format!

Play these cards with Sanctuary Guard Dragon in the premium format!