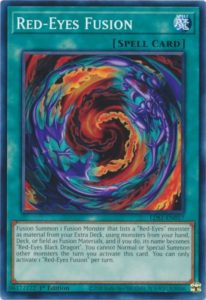 Fusion Summon 1 Fusion Monster that lists a “Red-Eyes” monster as material from your Extra Deck, using monsters from your hand, Deck, or field as Fusion Materials, and if you do, its name becomes “Red-Eyes Black Dragon”. You cannot Normal or Special Summon other monsters the turn you activate this card. You can only activate 1 “Red-Eyes Fusion” per turn.

Red-Eyes Fusion is a an exclusive version of Polymerization for Red-Eyes. This spell special summons the archetype’s Fusion Monsters. It is an effective card for Red-Eyes and Dark Magician. Red-Eyes Fusion gives instant access to cards such as Red-Eyes Dark Dragoon.

Red-Eyes Fusion has an amazing effect. Red-Eyes Fusion special summons a Fusion Monster that a Red-Eyes monster with material from your hand, field, or deck. You easily summon a strong monster from the extra deck.

Furthermore, Red-Eyes Fusion is a consistent card. You are able to activate its effect during every turn. Your deck should have three copies of Red-Eyes Black Dragon and Dark Magician. There should be copies of those cards in your deck. Red-Eyes Fusion will always have those resources for your Fusion Summons.

However, Red-Eyes Fusion has a minor drawback. It does not allow you to normal or special an additional monster on the turn when you play this card. You are unable to play other combos if you wanted to summon another monster for the turn.

Play these cards with Red-Eyes Fusion!

Red-Eyes Slash Dragon is a good monster for Red-Eyes. You can use any warrior for Fusion Material. Red-Eyes Fusion can send Red-Eyes Black Dragon and any warrior from the deck to the graveyard for the summon.

Furthermore, the full potential of Red-Eyes Slash Dragon is on full display in a deck with warriors such as Gearfried the Red-Eyes Iron Knight. You can constantly negate and destroy the opponent’s cards with effects. You can also special summon warriors from the graveyard that were equipped to this Fusion Monster.

Overall, Red-Eyes Fusion is one of the strongest spell cards in Yu-Gi-Oh!. The most effective cards in the game enhance your strategy to the next level. You can play this card in a variety of decks. Dark Magician and Red-Eyes receive major advantages from this card because both archetypes can summon Red-Eyes Dark Dragoon. I highly recommend playing Red-Eyes Fusion in your decks.