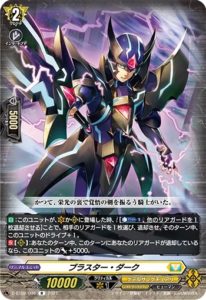 There was once a knight that wielded the blade of determination in the shadows of glory.

[AUTO]:When this unit is placed on (VC) or (RC), COST [Counter Blast (1) & retire another rear-guard], choose one of your opponent’s rear-guards, retire it, and this unit gets drive +1 until end of turn.
[CONT](RC):During your turn, if your rear-guard was retired this turn, this unit gets [Power]+5000.

Blaster Dark is part of the first set of Encounter Cards in Cardfight!! Vanguard. The legendary Shadow Paladin enters the D-Standard Format with his usual allies. Blaster Dark has similar abilities to his counterpart from the V Series.

Blaster Dark is a grade 2 unit with two abilities. He provides support for Phantom Blaster Dragon. The two cards have a strong connection like they have in other formats in the history of Cardfight!! Vanguard.

Blaster Dark retires an opponent’s rear-guard. In addition, Blaster Dark gains an additional drive check when you place him on the field in exchange for one counter blast and retiring a rear-guard. This ability puts pressure on the opponent in the early game. Blaster Dark has twin drive if he is your second vanguard. He gives a huge advantage in battle.

In addition, you need another rear-guard on the field before you play Blaster Dark. I recommend calling a rear-guard behind the vanguard on your first turn. Then, you may ride Blaster Dark on your next turn and retire your rear-guard in the back row to pay the cost.

Blaster Dark gains 5,00 power if you retired one of your rear-guards during the turn. This ability complements the first ability. Blaster Dark will have 15,000 power and two drive checks as a vanguard. He can hit the the opponent’s vanguard without a boost.

Furthermore, this ability only activates once. You cannot stack power on Blaster dark. He will only gain 5,000 power from this ability.

Play these cards with Blaster Dark (D Series) in the D-Standard Format!

Play these cards with Blaster Dark (D Series) in the Premium Format!

Overall, Blaster Dark from the D Series is an amazing card for the Keter Sanctuary and Shadow Paladins. His additional drive check makes him to be a major vanguard on the field. He constantly pressures the opponent with a strong offense. Blaster Dark (D Series) is a fine card for the D-Standard Format and Premium Format.