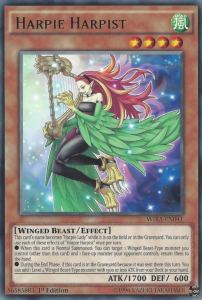 This card’s name becomes “Harpie Lady” while it is on the field or in the Graveyard. You can only use each of these effects of “Harpie Harpist” once per turn.
● When this card is Normal Summoned: You can target 1 Winged Beast-Type monster you control (other than this card) and 1 face-up monster your opponent controls; return them to the hand.
● During the End Phase, if this card is in the Graveyard because it was sent there this turn: You can add 1 Level 4 Winged Beast-Type monster with 1500 or less ATK from your Deck to your hand.

Harpie Harpist is a level four Winged Beast with three effects. She provides support to the Harpie archetype. She was first released in Crossed Souls, and reprinted for the first time in Wing Raiders. Harpist Harpist is one of the key cards in Harpie decks. She is a more playable card than the previous Harpie Ladies. Her effects are very beneficial to the deck.

Play these cards with Harpie Harpist!

Harpie Harpist’s third effect activates when she is in the graveyard during the same turn she is sent there. It allows you to add one level 4 Winged Beast-Type monster with 1,500 or less ATK less from your deck to hand. I love effects that add cards to my hand. Harpie Harpist can search for many powerful Harpie monsters from your deck. Cards such as Harpie Channeler are great to add to your hand for your advantage!

Overall, Harpie Harpist is a decent card to play in Harpie decks. She has a strong synergy with cards that require Harpie Lady on the field. I like her ability to return your opponent’s monster to his or her hand. She gives control over the field to you. The effect is handy when your opponent has a powerful monster on the field.