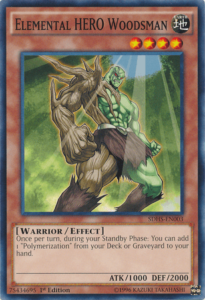 Once per turn, during your Standby Phase: You can add 1 “Polymerization” from your Deck or Graveyard to your hand.

Elemental HERO Woodsman adds consistency to a deck with Elemental Heroes. You will always have access to Polymerization and you can consistently summon Fusion Monsters. Consistency is the key for every deck’s success.

Elemental HERO Gaia requires one monster with the attribute of Earth. You may use Elemental HERO Woodsman as Fusion Material for this Fusion Monster. These cards complement each other.