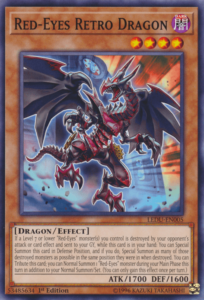 If a Level 7 or lower “Red-Eyes” monster(s) you control is destroyed by your opponent’s attack or card effect and sent to your GY, while this card is in your hand: You can Special Summon this card in Defense Position, and if you do, Special Summon as many of those destroyed monsters as possible in the same position they were in when destroyed. You can Tribute this card; you can Normal Summon 1 “Red-Eyes” monster during your Main Phase this turn in addition to your Normal Summon/Set. (You can only gain this effect once per turn.)

Red-Eyes Retro Dragon is a dragon from Yu-Gi-Oh! This card has two useful effects for Red-Eyes. Retro is the perfect word in this card’s name. This dragon provides support to Joey’s favorite monster the Red-Eyes Black Dragon!

Red-Eyes Retro Dragon is a powerful hand trap. Red-Eyes Retro Dragon special summons itself when a Red-Eyes monster is destroyed by an attack or effect, and it special summons all of the destroyed monsters from the opponent’s previous attack or effect. This effect makes this card to be a valuable asset in decks. This monster’s effect can be activated during either player’s turn.

Therefore, Red-Eyes Retro Dragon perfectly counters an opponent’s strategy. This monster counters cards such as Raigeki. You regain all of your monsters that were destroyed by the opponent. You do not lose your advantage.

Furthermore, the additional normal summon from this effect is a nice advantage. You can play two monsters without spending resources for special summons. The effect set the field for your next plays during your turn.

Overall, Red-Eyes Retro Dragon is a fantastic card with effective abilities. This card is one of the strongest hand traps in the game. This first effect from this dragon adds a lot of value to the card. Every Red-Eyes deck needs to play two to three copies of Red-Eyes Retro Dragon.