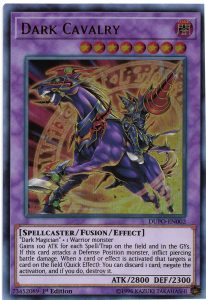 “Dark Magician” + 1 Warrior monster
Gains 100 ATK for each Spell/Trap on the field and in the GYs. If this card attacks a Defense Position monster, inflict piercing battle damage. When a card or effect is activated that targets a card on the field (Quick Effect): You can discard 1 card; negate the activation, and if you do, destroy it.

Dark Cavalry gains 100 ATK for each Spell and Trap on the field and both player’s graveyards. His ATK can quickly rise in the late stages of the game. You and your opponent most likely have some Spells ad Traps in the graveyards. Dark Cavalry becomes a stronger monster than many monsters in the game due to his first effect. For example, his ATK becomes 4,000 if there are 12 Spell cards in the graveyards.

Play these cards with Dark Cavalry!

Dark Cavalry deals piercing damage to your opponent if he attacks a monster in defense position. The second effect perfectly complements the first effect. Your opponent cannot avoid any damage. Dark Cavalry continues to increase his ATK and deals large amounts of damage. He can win games, despite your opponent’s defensive strategy.

The last effect of Dark Cavalry negates a card’s effect and destroys the card. It perfectly counters your opponent. He or she may attempt to play a powerful card, but you shut down the strategy. You must also discard a card to pay for the effect’s cost. The cost is worth it when your opponent plays a strong card.

Finally, Dark Cavalry is a very easy Fusion monster to summon. There are two Spells with effects to quickly summon the card. First, The Eye of Timaeus only needs Dark Magician on the field to play Dark Cavalry. This is the easiest method to play the card. Second, Magicalized Fusion can summon Dark Cavalry if you have a Dark Magician and Warrior monster in the graveyard. You need a warrior in your deck to activate and resolve this Spell Card’s effect.

Overall, Dark Cavalry is a powerful card to play in a Dark Magician deck. His first and third effects are very strong. Dark Cavalry can easily destroy many monsters if you have many Spells and Traps on the field or in the graveyard. He can reach high levels of ATK to blow your opponent away! Ride to victory with Dark Cavalry!