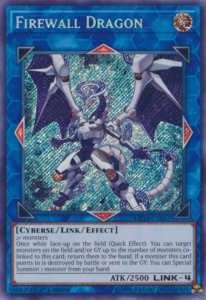 2+ monsters
Once while face-up on the field (Quick Effect): You can target monsters on the field and/or GY up to the number of monsters co-linked to this card; return them to the hand. If a monster this card points to is destroyed by battle or sent to the GY: You can Special Summon 1 monster from your hand.

Firewall Dragon is one of the best Link Monsters in Yu-Gi-Oh!. This mighty Cyberse monster has two powerful effects. Firewall Dragon has 2,500 attack points (ATK). Its best feature is its first effect for creating the firewall on the field.

The name of Firewall Dragon reflects the card’s first effect. Firewall Dragon returns monsters on the field and graveyard to a player’s hand as the number of monsters co-linked to the card. The effect controls the field for your advantage. Due to the effect being a quick effect, you may activate this effect during either player’s turn.

The best option is returning the opponent’s monster from the field to his or her hand. The opponent would need to spend resources to summon the monster again. You may have the opportunity to declare direct attacks to deal massive damage. You have a great opportunity to seal the deal to win the game.

Furthermore, Firewall Dragon neutralizes an opponent’s normal summon. He returns the opposing monster to opponent’s hand. Firewall Dragon provides an effective strategy for shutting down the opponents. You maintain the advantage with control of the field.

Firewall Dragon special summons a monster from your hand if a monster it points to is destroyed or sent to the graveyard. The effect either helps you gain an advantage or maintain your advantage on the field. You would simply replace one of your monsters. In the scenario of an opponent’s monster being destroyed, then your field gains an additional monster.

Firewall Dragon is a generic card without any requirements for a particular archetype. You can play this card in any deck. Firewall Dragon greatly enhances many decks because it provides a major advantage. Every archetype gains benefits from Firewall Dragon’s effects to return cards from the graveyard to the hand and special summoning monsters.

Furthermore, every deck gains a major advantage by returning the opponent’s monsters to his or her hand. You control the field and flow of the game. Firewall Dragon is a strong card in many decks.