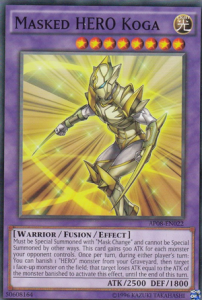 Must be Special Summoned with “Mask Change” and cannot be Special Summoned by other ways. This card gains 500 ATK for each monster your opponent controls. Once per turn, during either player’s turn: You can banish 1 “HERO” monster from your Graveyard, then target 1 face-up monster on the field; that target loses ATK equal to the ATK of the monster banished to activate this effect, until the end of this turn.

Masked HERO Koga is a member of the Masked Heroes! This powerful superhero uses his blades to defeat evildoers. He made his debut in the HERO Strike Structure Deck. He needs one monster with a Light attribute and Mask Change to be Fusion summoned! Masked HERO Koga has two powerful effects to lead your heroes to victory!

Masked HERO Koga gains 500 ATK for each of your opponent’s monsters. It is a great ability for gaining ATK, and a wise opponent will not summon many monsters to field. Masked HERO Koga is able to destroy many powerful monsters in battle. In addition, your opponent is unlikely to summon a monster with a higher ATK. You constantly have the advantage as long he is on your field.

Overall, Masked HERO Koga is an effective Fusion Monster. It is one of my favorite cards in my extra deck. I play one copy of it in my Elemental HERO deck. It is a useful card when I am playing a game against a swarm deck. Masked HERO Koga is the perfect HERO to counter decks with a swarm of monsters.