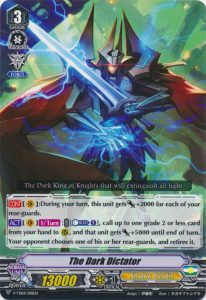 The Dark King of Knights that will extinguish all light.

The Dark Dictator’s first skill is a slightly altered version of his original skill. The first skill gives him 2,000 for each of your rear-guards. Unlike the original card, you may boost the new dictator. A full field and a single Force maker will raise his power to 33,000 before receiving a boost from a rear-guard. His power can continue to stack as long as you continue to ride The Dark Dictator.

Secondly, his second skill makes him one of the best vanguards in the current format. He calls a unit from your hand and retires an opponent’s rear-guard. This skill has a lot of chemistry with many Shadow Paladins. The only downside is your opponent chooses which rear-guard to retire. If your opponent has a few units, then their options are very limited.

Combo 1: Play Blaster Dark and The Dark Dictator to retire two of your opponent’s rear-guards.

However, Promise Daughter is currently the only card in the Standard format that is able to bypass The Dark Dictator. She cannot be retired by opponent’s effects, but she can be targeted. Oracle Think Tank players should always choose her because she will remain on the field and they can maintain their units. I am completely okay with this weakness to Oracle Think Tank. Every card should have a weakness to balance the card’s strength.

Play these cards with The Dark Dictator

Overall, The Dark Dictator has quickly become one of my favorite vanguards for Shadow Paladins. He sets the new standard for vanguards in trial decks. He gains a large amount of power and can control your opponent’s board. Many Shadow Paladins benefit from this skill such as Blaster Dark and Black Sage Charon. The Dark Dictator has been reborn in standard to set new laws by his orders!