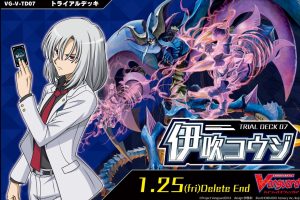 Bushiroad made headlines this morning with their announcement for the seventh Cardfight!! Vanguard V trial deck and fourth booster pack! Link Joker and the Deletors will make their debut in Trial Deck Vol.07 Kouji Ibuki and Booster Pack Vol.04: Vilest! Deletor. Kouji Ibuki plays a Deletor deck in the manga. Link Joker has been confirmed to be a Force clan. I am looking forward to their new offensive play style. 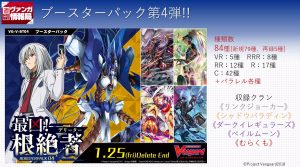 Booster Pack Vol.04: Vilest! Deletor and Trial Deck Vol.07 Kouji Ibuki will be released on January 25th, 2019 in Japan. The release dates for the English version will be announced soon.