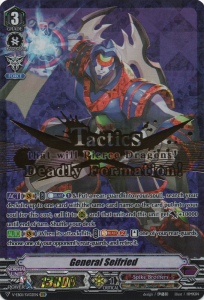 [ACT](VC):COST [Counter Blast (1) & Put a rear-guard into your soul], search your deck for up to one card with the same card name as the card put into your soul for this cost, call it to (RC), and that unit and this unit get [Power]+10000 until end of turn. Shuffle your deck.
[AUTO](VC):When its attack hits, COST [Soul Blast (2)], [Stand] one of your rear-guards, choose one of your opponent’s rear-guards, and retire it.

General Seifried is the leader of Spike Brothers. He is one of Spike Brothers best vanguard in the current meta. The new version of this football player has a Force marker. This all-star player is one of the best players on Cray. He uses athletic skills to superior call his teammates to the field!

General Seifried puts one rear-guard into the soul and superior calls a card with the same as the card put into the soul from the deck. Then, General Seifried and your new rear-guard gain 10,000 power. This skill is great for many reasons. First, it builds the soul without you losing resources. You will superior call the same card from your deck. Your soul is also very important for the second skill. Second, your vanguard and this rear-guard gain an impressive 10,000 power.

Play these cards with General Seifried!

Furthermore, Spike Brothers have a lot of cards that support General Siefried. My list of cards to play with General Seifried has synergy with him. These cards help maintain your resources. They go into the soul for the skill’s cost. In addition, they also gain power in addition to the power from your vanguard’s first skill.

General Seifried’s second skill stands a rear-guard and retires one of your opponent’s rear-guards if he hits a unit. This is a great ability for Spike Brothers to gain an extra attack in combat. However, your opponent is unlikely to allow this attack to hit him or her in the late game. Your opponent will use a perfect guard to prevent damage and a second attack from a rear-guard. You cannot always rely on this second skill in combat.

Overall, General Seifried is an effective card for Spike Brothers in the standard format. Both of his skills enhance the units in the deck. You gain a lot of power from the first skill. I also like the second skill’s potential, but it is consistent as my opponent use a perfect guard to prevent it from activating in the late game.