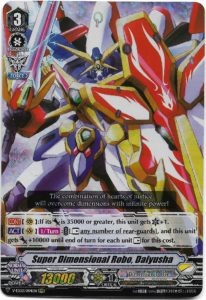 The combination of hearts of justice will overcome dimensions with infinite power!

Super Dimensional Robo, Daiyusha is back in the name of justice! He is a RRR card in Champions of The Asia Circuit. I like his new artwork more than the original card. He is in stance ready for a battle. His sword and shield will deliver justice to all citizens on Cray.

Super Dimensional Robo, Daiyusha gains a critical if its power is 35,000 or greater. The additional critical forces a lot of pressure on your opponent, and he or she will be forced to defend with a Perfect Guard (Sentinel). You can treat your opponent’s damage zone differently, and can be very aggressive when he or she has three or four damage. Your opponent is in a corner at four damage because one hit from Daiyusha will seal the game. If your opponent does not block the attack, then you can quickly win a game with a critical trigger to deal more damage.

Furthermore, you can trigger the first skill very easily. The Force marker gives Daiyusha 10,000 power, and he will have 23,000 power with a single Force marker. Cosmo Beak and Dimensional Robo, Daibrave have skills to boost Daiyusha’s power. Both cards must be played in a deck with Daiyusha. Their skills give 5,000 power to the vanguard. Then, Daiyusha’s second skill gives him 10,000 power.

The second ability rests any number of rear-guards, and Daiyusha gains 10,000 power for each unit rested for the cost. This skill only serves two important purposes. First, it helps enable Daiyusha’s first skill to gain a critical. Secondly, it sets up Ultimate Dimensional Robo, Great Daiyusha’s superior ride! I recommend resting units in the back row because Force markers will give your rear-guards in the front row 10,000 power. Your rear-guards with Force markers are able to hit your opponent’s vanguard.

Play these cards with Super Dimensional Robo, Daiyusha in the standard format!