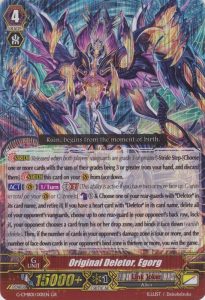 Ruin, begins from the moment of birth.

[Stride]-Stride Step-COST [Choose one or more cards with the sum of their grades being 3 or greater from your hand, and discard them], Stride this card on your (VC) from face down.
[ACT](VC)1/Turn Generation Break 2:COST [Counter Blast (1) & Choose one of your rear-guards with “Deletor” in its card name, and retire it], if you have a heart card with “Deletor” in its card name, delete all of your opponent’s vanguards, choose up to one rear-guard in your opponent’s back row, lock it, your opponent chooses a card from his or her drop zone, and binds it face down (vanish delete). Then, if the number of cards in your opponent’s damage zone is four or more, and the number of face down cards in your opponent’s bind zone is thirteen or more, you win the game.

A future with Deletors in control of the world would be terrifying. This terrifying future is a possibility in Cardfight!! Vanguard G. Original Deletor, Egorg leads the Deltors in a possible future of destruction and dominance over Cray. He has deleted all future possibilities with his win condition. He deletes the competition!

Original Deletor, Egorg’s skill is very long, and I am going to break it down into parts. First, deletes all of your opponent’s vanguards. Then, he locks an opponent’s rear-guard in the back row and vanish deletes a card from his or her drop zone. Original Deletor, Egorg takes control of a game in a single skill. Your opponent loses three resources in three areas of the game.

Furthermore, your opponent loses a card from his or her drop zone. This skill hurts decks that rely on the drop zone as a resource. Your opponent may lose a key card. You also are setting up Egorg’s winning image. You can potentially play this skill four times in a game.

In addition, Original Deletor, Egorg locks a rear-guard in the back row. I always choose the rear-guard behind my opponent’s vanguard. He or she will be unable to boost a deleted vanguard. My opponent will not have access to the card’s skills. Guarding their attacks will be slightly easier than normal.

Overall, Original Deletor, Egorg is a solid G-Unit for Deletors. He adds a lot of pressure on my opponent. He is difficult to guard without a Perfect Guard. This skill also locks a rear-guard and vanish deletes a card from the drop zone. His win condition is just icing on the cake. Original Deletor, Egorg will delete all of your opponents and set a new order under the Deletors’ control!