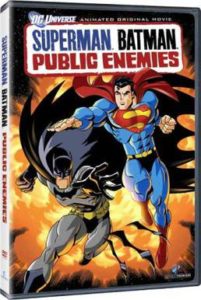 Superman/Batman is a superhero movie based on DC Comics’s series Public Enemies. The series focuses on Batman and Superman teaming up to prevent a Kryptonite meteor from hitting Earth and defeating President Luthor. Some unexpected superheroes attempt to stop them under President Luthor’s orders, and an army of villains battle to collect a huge bounty for Superman. It directed by Sam Liu. Superman/Batman: Public Enemies was released on September 29th, 2009.

The United States is at its lowest peak in history with a failing economy and high crime rate. Lex Luthor runs for president of the United States to take advantage of the situation to gain political authority and position himself to use a new tactic to defeat Superman. This version of Lex Luthor strokes his ego to a high degree. It is a great concept to put a major villain in a position of authority. He has power over the country to some extent and uses it to order Justice League’s members.

I am not surprised to see person like Lex Luthor winning the presidency. As we currently have a president who has also allegedly committed numerous crimes and has a history of racism. However, I am very surprised Superman and Batman are the only heroes suspicious of Lex Luthor’s motives. It is out of character for the other heroes to not question Lex Luthor’s authority and automatically believe his pitch of being a changed man.

The table is stacked against Batman and Superman. Lex Luthor is not the only threat to the United States and Earth. A large meteor made of Kryptonite is on course to collide with Earth. It is a threat to our heroes and a tool for Lex Luthor to recreate a new world with him as the world’s leader. Our heroes’ hands are full with a meteor, President Luthor, and Luthor’s team of superheroes.

Furthermore, Superman/Batman: Public Enemies reflects our political atmosphere through Lex Luthor’s political strategy. Lex Luthor like any corrupt politician with a large ego uses propaganda to manipulate the public. He uses the meteor as propaganda to frame Superman for Metallo’s murder and defaming him to be a dangerous monster. He sets a large bounty of one billion dollars to any person or group, who is able to arrest Superman.

President Luthor’s warrant for Superman’s arrest leads to non-stop action. Many popular villains such as Killer Frost, Mr. Freeze, and Mongul battle Batman and Superman. The fights have a smooth flow with both Batman and Superman sharing the spotlight. Batman uses martial arts and his handy gadgets to subdue Solomon Grundy. Superman overpowers his foes with brute strength, and he defeats all the cold villains with a single heat vision.

Batman and Superman are a dynamic duo and they work play off of each other well. Superman retains his divine persona and image, and Batman is as cunning as ever. Superman is more direct and open about his feelings for his best friend Batman. On the other hand, Batman displays his emotions through his actions such as his willingness to sacrifice himself to save everyone.

Unfortunately, Power Girl is not on screen very often. I would have liked to see more of Power Girl in the plot and combat. She does very little fighting in the film. Her most notable act in the plot is unintentionally killing Major Force, and forcing Captain Atom to absorb all the radiation from Major Force’s body. Then, her second and last notable act is giving the meteor’s information to Toyman. She does not do anything else meaningful to the plot. 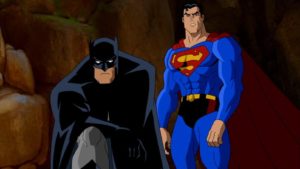 The most random fight in the movie is Batman’s and Superman’s battle against Hawkman and Captain Marvel. It appears to be filler as an excuse to extend time. Why didn’t Black Lightning, Starfire, and Power Girl tell Hawkman and Captain Marvel about Lex Luthor’s corruption  and setting up Superman? The fight would have been avoided, and the time could have been used for more explanation on Lex’s ability to win the election and sway Major Force to support his position against Superman.

The best scene in the film is Batman piloting Toyman’s robot. I enjoy this scene in the film with Batman taking control of the conflict. His confidence shines as he does not second think his decision. Despite Superman’s warning, Batman continues to run to the robot’s cockpit to prevent the disaster. He does the necessary action to resolve the conflict by risking his left.

Superman/Batman: Public Enemies has the message to be careful of who you vote for and it is okay to question authority under the proper situation. Questioning someone’s actions does automatically not mean the authoritative figure is wrong. The person’s answer to the question will clear your mind on whether or not you should support the decision. Power Girl’s feelings are conflicted in following Lex Luthor’s orders because she knows his past and Superman has always used his amazing powers for justice.

Clancy Brown voices Lex Luthor. Clancy captures the full character of the evil genius. His deep and smooth voice forces people’s attention and respect. It gives off a special charm from an alpha male. He gives a charming tone during President Luthor’s speeches that sound convincing from a good leader. He does not sound like your stereotypical villain. I love his final lines “God Bless America. Go Bless me!”

Almost every character has good to great designs. Their designs pay respect to their comic and cartoon counterparts. Batman has the best design in the entire cast. His costume is similar to the one in the DC Animated Universe. Superman dawns his usual blue costume with his signature emblem and red cape.

However, Amanda Waller’s design is very strange to me. Her design is the only bad design in my opinion. I was completely taken back when I first saw Amanda Wall. Her neck is missing. How does she breath oxygen? Her body looks like boxes are stacked together in layers.

The last theme is just perfect. It magnifies Batman and Superman saving the world from the meteor and America’s worst president Lex Luthor. Not only does it celebrate their victory, the theme also serves to redeem Superman’s public image. The world knows the truth about Superman’s character and citizens see the dark knight alongside him.

As a political science major, the concepts from Superman/Batman: Public Enemies make the movie interesting to watch. On the first day of class, my professors always asked us the definition of politics. My answer always was ignorance and pure stupidity because many American voters do not research their candidates and too many bad policies hurt the average citizen. I want to see these dynamics of politics being used against the protagonists and their struggle to overcome the conflicts. Superman/Batman: Public Enemies delivers on this subject matter.

I also enjoyed Superman/Batman: Public Enemies for the entertaining battles and good story. The story explores politics and how politics affects alliances between common allies. The movie would have been a masterpiece if it was more story driven. A few missing elements from the film could have elevated the story. All the battles are intense with a lot on the line.

All in all, this is a must watch movie for every DC Comics fan. It is an awesome movie with a solid story. Our heroes Batman and Superman save the day again.