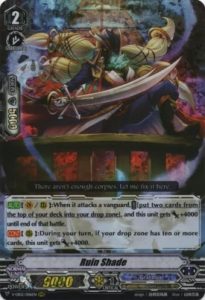 There aren’t enough corpses. Let me fix it here.

The original Ruin Shade is one of the best generic cards from Cardfight!! Vanguard. Nearly every Granblue deck plays her because her skill is an amazing ability. I have high expectations for the new and improved version of Ruin Shade. She has new artwork and two powerful skills. Ruin Shade’s new artwork is better than the original card’s artwork.

Ruin Shade complements Granblue’s strategy to mill cards to the drop zone and superior call units from the drop zone. Her first skill mills two cards from your deck to the drop zone when she attacks your opponent. She also gains 4,000 power from this skill. Ruin Shade enables your strategy and generates offense. She can hit most vanguards without a boost.

Furthermore, Ruin Shade is setting up Granblue’s strategy to superior call those units from the drop zone. She is a key card in this clan for this reason. You can activate this skill every turn when Ruin Shade attacks your opponent. You can send two cards to your drop zone during every turn. This strategy enables skills from other units on the field and in the drop zone.

Ruin Shade gains 4,000 power when your drop zone has ten or more cards. This skill is easy to fulfill. Granblue has many cards that mill your deck, and Ruin Shade’s first skill also sets up this skill. Her power increases from 9,000 to 17,000 with both skills. She can hit any vanguard without requiring a boost! A boost from a rear-guard increases Ruin Shade’s power to 24,000.

Play these cards with Ruin Shade in the standard format!

Finally, Ruin Shade perfectly fits in Granblue’s decks in the premium format. You want to always mill cards from your deck to drop zone. Many cards from Cardfight!! Vanguard G have synergy with Ruin Shade’s first skill. Her skills to increase her power are also useful abilities. Ruin Shade swings powerful attacks at your opponent.

Play these cards with Ruin Shade in the premium format!

Overall, Ruin Shade from the V series exceeds all of my expectations. Ruin Shade is one of the best cards for Granblue. I recommend playing four copies of her in your deck. Her skills are great abilities for Granblue in the premium and standard formats. Ruin Shade enables the clan’s strategy, and adds consistency to decks.