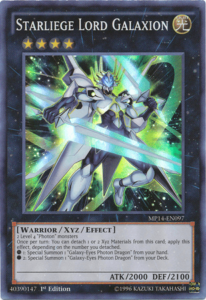 Starliege Lord Galaxion special summons Galaxy-Eyes Photon Dragon from your deck, and the effect costs two XYZ Material. The cost for the second effect is more expensive than the first effect because the ability special summons the monster from the deck. This is a good backup strategy if you do not have Galaxy-Eyes Photon Dragon in your hand. The cost is still fair for easily summoning a powerful monster to the field.